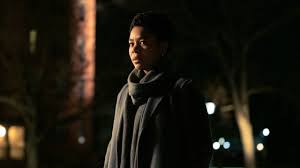 Set at a fictional elite Northeast college campus, Master uses horror conventions to confront elitism and systematic racism that are historically ingrained into Higher Education. Regina Hall stars as the newly appointed "Master" of the university, while Zoe Renee co-stars as a freshman Jasmine and Amber Gray as a popular literature professor. Written and directed by Mariama Diallo, Master speaks to the current moment in America and its ongoing struggle to reckon with its past.

Diallo's direction keeps us in the perspective of three African American female leads, feeling constantly surrounded and being judged gatekeeping faculty and privileged students. Jasmine's interaction with the white students takes on thorny power dynamics and microaggressions (constant compliments that border on condescension), such as her roommate's condescension or a patronizing librarian casually accusing her of stealing just after. The guys on campus, mostly pot smoking louses, also act towards her with a more overt derision. As incidents of racial hatred escalate, ghosts from the past appear in an allusion to The Shining. Hall is equally effective as an academic who earned her place through determination and hard work, enduring slights from the white dominated world of elite colleges.

Master offers blunt honesty about higher education as it remains one of America's most troubled institutions. When the film moves into horror territory, it reveals nothing we've never seen before, these elements serve as more of a texture to the story. Melancholy, but never preachy, Master strikes a balance of distinctly American gothic motifs grounded in a chilly realism.

Posted by Eric Gilliland at 2:42 PM