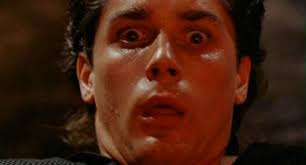 Society continues to gain prominence as a cult classic of modern horror. A satire on class and elitism, it's primarily remembered for the gross out last 20 minutes. Set in Beverly Hills at the end of the 1980s, we follow rich, popular white kids as they jockey for social position. Billy is starting to suspect something is up with his parents after a friend provides with a disturbing recording of his sister and parents in a bizarre discussion. As the story ramps it becomes clear, something really is amiss and about to get really strange.

Like George Romero's horror, the social commentary in Society makes for what it lacks in nuance with shock. In a world where elites have unlimited advantages in every aspect of life, the theme in the movie is painfully relevant. Living through a pandemic and a time of rising fascism, one wonders how far the elites will go to secure their status. The film suggest they view anyone below them as chattel to be exploited for their own ends. The grotesque and enraging entitlement all boils over during the climax as taboos are broken.

Is Society a good movie? The vacuous nature of the characters and somewhat mundane lead up don't quite place it up there with the sociological horror classics like Invasion of the Body Snatchers or Night of the Living Dead. But as a springboard for discussion on class and the nature of modern world - it's perfect.

Posted by Eric Gilliland at 8:31 PM