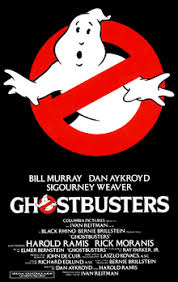 Ghostbusters was the highest grossing film of 1984, the only new release to surpass $200 million, topping the Spielberg/Lucas production Indiana Jones and the Temple of Doom and also the Spielberg produced holiday hit Gremlins. It goes without saying 1984 stands as a watershed of the blockbuster era that began in 1975 with Jaws. The film also proved a landmark in moving horror further into the mainstream, as the film repackaged themes in more adult oriented films like The Exorcist and The Shining for a tentpole movie.

Dan Aykroyd wrote the initial and ambitious treatment for Ghostbusters with characters written for himself, SNL cast mate John Belushi and his co-star from Trading Places Eddie Murphy. With the passing of Belushi in 1982, the Peter Venkman role went to Bill Murray. Aykroyd took on the role of Ray Stantz, written to be the "heart" of the group, Harold Ramis as the "brains" Egon Spengler, and Ernie Hudson as Winston Zeddemore, the everyman who joins them. 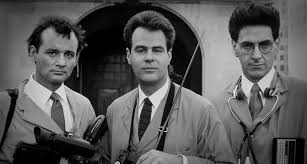 A product of the Reagan Era in its tale of a small business going up against the forces of government bureaucracy, but also a classic underdog story. William Atherton as the comically antagonistic EPA official would look strange and highly reactionary to viewers in 2022. At the same time, the Ghostbusters proved to be politically savvy in persuading the mayor to let them fight the supernatural forces threatening the city. Venkman sees the group as a profit making enterprise, while Ray and Egon are more passionate about the scientific and metaphysical possibilities.

The film begins with the three of them living off research grants in academia. When the university decides their research is too out there their funding is cut off so they must go into business on their own. It's a replaying of the old cliché that colleges are out of touch and entrepreneurs are the true drivers of innovation. Or maybe it's more about anti-authoritarians and outsiders overcoming prevailing ethos whether it comes from the right or left.

Politics aside, Ghostbusters takes the classic format of misfits joining together and succeeding against long odds. With Bill Murray's irreverent attitude towards authority, Aykroyd's heartfelt expertise, and Egon's self-assured, nervy demeanor. They become folk heroes overnight, the dynamic is not unlike that of the SNL's "Not Ready for Prime Time Players" becoming a voice of the people by becoming pop culture icons.

Sigourney Weaver and Rick Moranis also make an unlikely comic pairing. Weaver plays Dana Barrett, a professional musician having strange visions in her apartment, unaware her building is haunted. Moranis as her geeky neighbor Louis Tully. The yin/yang of the casting is uncanny. Weaver played the most iconic female action ever in the Alien franchise, while Moranis was a comic prodigy on SCTV. Pairing Weaver with the inept suitor Louis and Murray as the immature (slightly sketchy) but ultimately good guy - it's screwball comedy with an '80s bent. 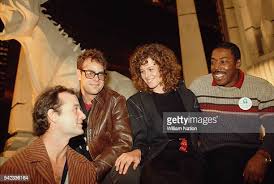 The parody of haunted apartment in Ghostbusters life draws parallels to Rosemary's Baby. Space is used in several creative ways throughout. On location shooting in New York provides a vibrant verisimilitude, not unlike the use of Iraq and Georgetown in The Exorcist. Gothic buildings are made ominous, the city serves as a supernatural amusement park. Hotels, apartments, and libraries are universes onto themselves.

The most fascinating aspect of Ghostbusters is how it interweaves comedy with the supernatural. Aykroyd's original story leaned harder into the horror elements with some whacky Sci-Fi concepts of other dimensions. The streamlined script completed with Ramis and director Ivan Reitman feels like it left out quite a bit and that's part of the movie's magic. One can imagine an entire movie about a culture war debate over the existence of ghosts or a religious crusade against them. We get just enough technobabble - and played for comedy not seriousness. There's no Donald Pleasance or Max Von Sydow meditating on the nature of evil. Instead of we have Aykroyd making eschatological banter as part of his everyday conversation.

While also rooted in the old Universal comedies with Abbott and Costello, Ghostbusters still manages to create a sense of menace, but always deflected by the humor. The film's achievement ranks even higher when so many movies have never managed to get the tone right with mainstream horror-comedy. The personas of the actors are a big part of it, but also the writing and the brilliant cinematography by Laszlo Kovacs.

I don't have much more to add on Ghostbusters. For an epic in depth analysis I would point all readers to Overthinking Ghostbusters by Adam Bertocci. If you think you know the movie, you'll learn much more there.