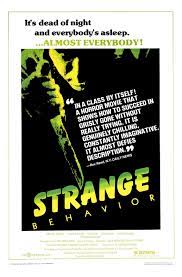 Strange Behavior is often classified as a 1980s slasher, but that's far too simple of a classification. Elements from Sci-Fi, murder mystery, even family drama is woven into a wonderfully cultish film. Currently streaming on the Criterion Channel as part of its '80s Horror programmer in what's described as a precursor to Twin Peaks, an apt comparison, although Michael Laughlin's direction is more modulated than something like Blue Velvet, maintaining a middle ground between the real and the surreal.

For instance, in one of the most memorable scenes 80s teenagers are all dressed up like '60s TV characters dancing to the 1965 pop hit "Lighten' Strikes." It's a little real, a little spontaneous, ramshackle, surreal, purely cinematic. Supposedly set in the America Midwest, it's actually filmed in New Zealand which adds to the offbeat tone.

The only shortcomings are the shaggy dog plot and occasional diversions in a story involving mad German scientists conducting experiments at the local high school - possibly connected to a recent rash of murders. The cast includes Michael Murphy, Louise Fletcher, Fiona Lewis, Dan Shor, Dey Young, and Marc McClure. Intended as the first of trilogy, Strange Behavior was followed by Strange Invaders, but unfortunately for cult movie fans the trilogy was left incomplete. ***1/2

Posted by Eric Gilliland at 8:22 PM