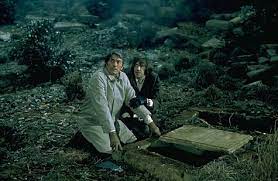 According to Wikipedia, The Omen sprung from a discussion among producers about the anti-Christ, one of whom was a born again evangelical. Mainstream religion in the 1970s was getting a little whacky (suddenly priests find a new purpose in the horror genre), and The Omen fits the era like a glove (and may also account for why the 2006 Bush era remake was a dud).

The Omen was written as a popcorn movie, a summer blockbuster for the Bicentennial year (it was the 7th highest grossing film.) It was also part of the cycle of movies on prophecy and the nature of evil that began with Rosemary's Baby in 1968 and continues on into the 21st Century. The '70s marked a middle ground between secularized religious fables leaning into some exploitative elements and the more earnest (unintentionally funny) religious made for the "faith based" crowd in the 2000s.

Watching The Omen in 2022, it plays as camp, a heightened version of a civilization in decline as the aristocracy finds itself infiltrated by Satan's acolytes. From an aging Gregory Peck slowly realizing he's a pawn in a plot far more consequential than Watergate to poor Lee Remick being terrorized at every turn (the film is especially harsh on women) family, kids, marriage, picket fences all looks like one bad trip. David Warner, who looks like he just came from a photo shoot with Led Zeppelin, labors hours in his darkroom connecting the dots of a vast satanic conspiracy! The animal kingdom also gets into the act with packs of jackals, baboons, and viscous guard dogs turning in some wild performances - no doubt a busy set for the wranglers!

Richard Donner's only horror film to my knowledge, excluding his vast catalog of TV work, used all the right influences from Hammer films, Giallos (the kills), and a touch of The Exorcist. I bet Donner and his editor Stuart Baird had a ton of fun editing these sequences. Whenever a mainstream director takes on horror it way too middle of the road, so I like how Donner really went for it and insisted viewers debate whether the kid Damian was really behind all the killings.

Jerry Goldsmith's score is delightfully over the top, a parody of sorts.

I suppose Satan themed movies were entering a Baroque phase by 1976 and The Omen offers all that and more. Tell me what other movie you get to see Gregory Peck and David Warner wander through a graveyard digging graves and getting attacked by jackals?

Posted by Eric Gilliland at 7:41 PM