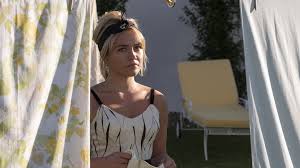 Offscreen drama aside, Don't Worry Darling is a passable thriller that wears its influences a little too close, thinking The Stepford Wives and Get Back. Set at an undisclosed location near a desert, the film follows what appears to be Utopian community where gender norms are strictly enforced.

Florence Pugh stars as Alice, an on the surface happy housewife, married to 9-5 husband Jack (Harry Styles) who works for a mysterious company named Victory. The film opens with a raucous cocktail party that appears to be around the year 1960. Alice and Jack have achieved domestic bliss but are being pressured by their peers to have children. Meanwhile, the elusive head of the Victory Project "Frank" played by Chris Pine routinely appears to deliver self-help speeches while keeping a close watch on his employees and their wives.

All the Twilight Zone tropes are there as we follow Alice as more questions are raised about the nature of her reality. Pugh does what she can with the recycled material, Styles and Pine are both cyphers and lack charisma. We're alone with Pugh throughout the film, she's never allowed a friend or confidante, creating a hollowness that permeates the entire story.

The social commentary in Don't Worry Darling is aimed at the reactionary "trad" culture, contemporary men and women (mostly men?) who prefer a 1950s fantasy of church, marriage, office, and family. Men's Right advocates and anti-feminists who were the targets of The Stepford Wives, a novel and film that was more psychologically astute. The "reveal" in Don't Worry Darling  is actually interesting, but way too abrupt.

Olivia Wilde's direction includes some sly sequences, including an Altmanesque pool party and a lavish New Year's reception. But in terms of plot, the narrative moves in fits and starts. Pugh is engaging, unfortunately the rest of the cast offers only meager returns. **1/2

Posted by Eric Gilliland at 6:17 PM