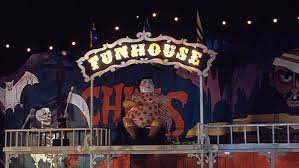 Highly regarded, but never widely available, I was finally able to watch Tobe Hooper's 1981 film The Funhouse on the Criterion Channel. At his best, Hooper was often ahead of the curve, one of the true innovators in modern horror cinema. In 1974, The Texas Chainsaw Massacre proved a landmark. His 1977 follow up a horror-comedy Eaten Alive was somewhat less regarded but deserves cult classic status. Many at the time remarked on the reflexive elements in The Funhouse, or in today's the parlance- it went meta.

The opening scene directly alludes to Psycho and Halloween, setting the reflexive tone. Amy (Elizabeth Berridge), the teenager protagonist, heads out to the carnival with her boyfriend Buzz where they meet friends Liz and Richie. Hooper spends a fair amount of time setting up the atmosphere of the carnival with all its attractions, reminding me of Ray Bradbury's classic novel Something Wicked Comes This Way Comes. Whereas Bradbury was concerned with childhood ending and mortality and the carnival being a playground for such themes, Hooper is more focused on the carnival to explore the dark side of humanity, similar to Tod Browning's Freaks, and how the young are often unprepared to face it.

After checking out the attractions including a macabre magic show and fortune tellers, the four of them get high on pot and decide to stay the night inside the funhouse. Things begin to take a horrific turn as they realize there are literal monsters running around inside. Some of the beats from Chainsaw Massacre are repeated but in a new context, Hooper is interrogating the conventions of horror movies and the way teenagers are represented. But it's also meaner and less fun (but more human) than the other slasher franchises that would rule the decade. In real peril and facing terrifying threats, the four of them realize they may not survive the night.

The Funhouse anticipated the "post-modern" approach to horror that would dominate the 1990s with Scream and The Blair Witch Project. If I could identify one flaw it would the casting of the teenagers, with the exception of Amy, they bring little to their roles except being clueless caricatures. Creating smarter and less annoying teenage archetypes may have added even more punch to the story. The cinematography was incredible and Hooper's feel for the horror genre remains impressive in retrospect. Images stay with you - the closing shot hits a variety of notes in keeping with the complex tone of the film.

Posted by Eric Gilliland at 1:52 AM