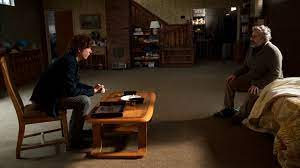 The Patient just completed its 10-episode run as a limited series on Hulu. Written by Joel Fields and Joe Weisberg the series stars Steve Carell and Domhnall Gleason, in an intense and often disturbing story of a serial killer imprisoning a therapist in his basement. Despite the heavy hitting premise, the series is leans into being a character study of violence and psychology. Themes of Jewish identity and the purpose of mental therapy are also explored, The Patient manages to transcend the tropes of its genre.

Carell plays Dr. Alan Stauss, a therapist with thriving practice mourning the death of his wife Beth (Laura Niemi) and estrangement from his son Ezra (Andrew Leeds) who converted to Orthodox Judaism. Flashbacks are used throughout to recall key moments in Strauss's life, not unlike Lost.

Little is revealed about the past of Sam Fortner (Gleeson) except that he's a serial killer who was abused by his father. A classic study of the banality of evil, Sam is a foodie and works as a restaurant inspector, and a big fan of Kenny Chesney. Almost fey in appearance, Sam is one of the least threatening figures to appear as cold blooded killer. Gleeson peppers his performance with minor nuances.

Strauss wakes one morning and finds his foot chained to a wall. Sam informs he's been taken captive to "cure" him of killing people. Once the initial shock wears off, Alan tries to treat him. He gets to the root of Sam's rage going back to his father and being bullied in school. It's clear Sam is a psychopath leading a double life by hiding in plain sight.

Their therapy sessions recall Tony Soprano and Dr. Melfi from The Sopranos. Like that patient-doctor relationship, their exchanges are compelling but never lead to anything. Alan is fighting a two-front war, convincing Sam they are building a relationship while also plotting an escape. In fantasy sequences he talks to his own therapist played by David Alan Grier in a strong supporting performance, serving as his conscience in an unthinkable situation.

The series blends the mundane with sudden bursts of violence. In one horrific moment from an early episode, Sam brings one of his still living victims' home (a restaurant manager who argued with him) and forces Alan to deal with the horrendous scene. Flashes of progress in Sam are continually erased in predictable setbacks. Yet Sam does go through something of an evolution, while Alan's journey is more existential.

Episodes frequently reference and suggest parallels to the Holocaust, Alan is haunted by family members who died in the death camps. In the ninth episode "Auschwitz" Alan turns to Victor Frankl's book Man's Search for Meaning to find hope. Alan associates his captivity as a replay of what his relatives experienced. Issues of how to resist and the soul crushing sense of the losses from the atrocities committed by the Nazis. While Sam never does or says anything antisemitic, he fits the profile of a war criminal who would commit such awful acts.

The heavy performances of Carell and Gleeson maintain an intensity throughout. An examination of evil as a malignant force in the past and present, the series is anxiety inducing and compelling, most of the episodes are only 30 minutes. Carell brings an inner strength to Alan, which is about the most heroic one could hope in such a situation. I'm still not sure how I feel about the ending, it's both inevitable and surprising.

Posted by Eric Gilliland at 1:02 PM