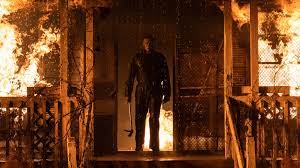 The second entry in the reboot Halloween trilogy, Halloween Kills strikes a curious balance between schlocky horror and being a thoughtful examination of repressed trauma boiling to the surface.

The action picks up on the same night of the first film with Laurie Strode (Jamie Lee Curtis) recovering in the hospital from her recent, almost fatal, encounter with Michael Myers. Falsely believing her nemesis is gone for good, the focus of this entry turns to the residents of Haddonfield, Illinois.

At a local watering hole, a group of survivors of the initial attack of Myers 40 years before gather in a communal sharing of support. When word starts to spread Myers is back in town and on another rampage, Tommy Doyle (Anthony Michael Hall), the character appeared as one of the kids Laurie was babysitting in the original movie, gathers a mob intent on killing Michael. As a character states, "He won't stop killing until we stop him."

Much of the action, like the 1981 sequel to the original, takes place at the hospital. Believing it's the location where Michael is heading, the mob stages a standoff. As those seeking mob justice often discover, they make many errors and more harm and damage. Upon its release a year ago, many drew comparisons to the 1/6/21 assault on the U.S. Capitol by a hateful mob incited by a sitting president.

But relations between angry mobs and monsters goes all the way back to James Whale's 1931 version of Frankenstein. The unsettling element of Halloween Kills is that we know some of the people in the mob and recoil at their behavior turning ugly. Eventually they realize they've made a mistake and inflamed the situation. A recurring theme running though these reboot films is a frustration and shock that old threats once relegated to the past keep recurring.

That's where Halloween and Halloween Kills channel the unease and terror of our current era. In a new century, horrors once relegated to previous eras have returned. Facing the existential challenges of the future feels even more foreboding with so much boiling back to the surface. Whatever Michael Myers is as a force of nature or spiritual entity, the bogeyman has proved himself resilient as a catch all symbol for what we fear.

Posted by Eric Gilliland at 9:14 PM