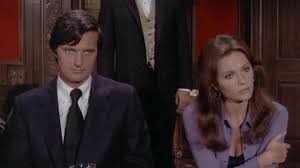 Alan Alda received top billing as journalist Myles Clarkson, a one-time promising concert pianist. But the true star of the film Jacqueline Bisset as Myles's wife Paula who becomes a supernatural investigator. After Myles interviews reclusive pianist Duncan Ely played by German actor Curd Jurgens who takes a liking to the couple, aided along by his mysterious "daughter" Roxanne (Barbara Perkins). Soon Myles and Paula are invited to Ely's mansion for swinging masquerade parties. Myles is enthralled by the revelry, while Paula is skeptical, especially after stumbling upon a strange shrine.

Jerry Goldsmith's score is the real star of the film, creating a creepy and psychedelic mood - blending classical with electronic music. Music also plays an important role in the story, serving as a means to tap into the supernatural or a higher state of being.

There are many twists and turns in The Mephisto Waltz, some of them inexplicable! If plot holes and inconsistencies take you out of a movie, I wouldn't recommend it. As a depiction the early 1970s when bourgeois folks were dabbling in the occult the film is an amusing time capsule. Decadent living rooms and secret rooms with dark paraphernalia, of its time but also a precursor to Eyes Wide Shut.

Bisset carries the film along as it gradually becomes her story. A pre-MASH Alda seems out of place in a horror movie about Satanic cults! Production wise, it looks and feels just a cut above a TV movie, but the freaky scenes involving the magic are well staged. The L.A. landscapes and architecture are also captured nicely.  ***

Posted by Eric Gilliland at 4:12 PM