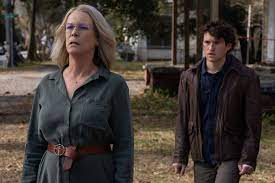 The third and concluding chapter of David Gordon Green's Halloween trilogy (Halloween Ends) serves as a fitting epilogue. By turning some of the tropes inside out and slightly changing the tone, the film asks: What makes a monster?

Set a few years after the first two films, which both took place on the same Halloween night, Laurie Strode has achieved some semblance of normalcy living with her granddaughter Allyson (Andi Matachak). Meanwhile Haddonfield remains in the grip of paranoia, terrified of Michael Myers reappearing.

In a harrowing prologue sequence, echoing the opening of the original 1978 Halloween and Wes Craven's Scream, we're introduced to Corey (Rohan Campbell), a young man about to start a babysitting job for the evening. When a tragedy ensues that's not directly Corey's fault, his character begins a tragic journey.

Halloween Ends draws upon elements of the King/Carpenter film Christine and Bram Stoker's classic Dracula. Michael Myers almost becomes rudimentary to the plot and these are the strongest parts of the film. The last section falls into more conventional mode with the inevitable confrontations and call backs to other moments in the saga.

The collaborative music score led by John Carpenter's team delivered on its brand of retro creepiness. Jamie Lee Curtis continued the long journey of Laurie from final girl to matriarch. Fans of the franchise may scoff at the somber tone of this finale, but it works as a fitting conclusion to this incarnation of the Halloween mythos.  ***

Posted by Eric Gilliland at 2:48 PM