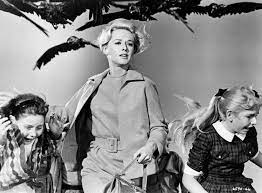 The creeping sense of dread in Alfred Hitchcock's The Birds combined with its surreal siege narrative remains an uncanny cinematic experience. Hitchcock's apocalyptic adaptation of the Daphne du Maurier short story still gets under the skin. Anytime I catch site of a murder of crows flying overhead I feel some trepidation.

Tippi Hedren stars as socialite Melanie Daniels. The film begins with Melanie meeting Mitch (Rod Taylor) at a pet store. They banter about birds and their exchange is mildly flirtatious, leading Melanie to track him down at Bodega Bay. The first half the movie plays as a high brow melodrama with the various romantic intrigues at the idyllic seashore community. A sense of malaise and frustration serves as a foreshadowing of the terror to come. Interspersed throughout are signs our feathered friends are acting strangely.

Hitchcock's mastery is on full display during the attack scenes, done without music and only the high- pitched bird squawks. They find ways into houses, swoop down in large numbers on children playing in a schoolyard, each attack is an escalation. In my favorite scene at the diner, locals express their fears about what's going on, when a bird expert points out humans live at the mercy birds who outnumber them by the billions. In other words, nothing can stop them.

Many saw Cold War parallels, the birds a stand in for the threat of nuclear war. The helplessness of everyone in such an attack is captured with brilliantly by Hitchcock. Nature is a big theme as well, mocking all human pretensions with sheer power. An otherworldly grimness certainly takes over in the last 20 minutes. Other films have trod similar ground such as Luis Bunuel's The Exterminating Angel or Lars Von Trier's Melancholia. The Birds in representing a rebellion by nature, forces the audience to grasp an arcane possibility.

An overblown melodrama for the first hour transforming into an outright horror spectacle is Hitchcock once again playing the audience with one grim joke after another.

Posted by Eric Gilliland at 2:32 PM