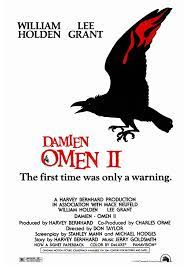 In some ways Damien: Omen II is a smarter and scarier film than The Omen, but it does lack the directorial panache Richard Donner brought to the first chapter. Mike Hodges, the original director of Damien, was fired a month into filming by the producers and replaced by Don Taylor, a journeymen known for getting projects done on time. Despite the production issues there's a number of memorable set pieces and some good performances.

William Holden stars, playing the brother to Gregory Peck from the original film, as industrialist who took in Damien, now a teenager. Jonathan Scott-Taylor took on the role as Damien and managed to be both sinister and sympathetic. When he learns the truth about himself he initially reacts with horror but quickly comes to embrace his evil self. Other members of the cast include Lee Grant, Sylvia Sydney, Lance Henriksen, Allan Arbus, and Meshach Taylor.

The script for Omen II brought a sense of international intrigue with a plot involving archaeology and multi-national corporations. Part of the story is also set at a military academy, a setting many films used around this time, where Damien is being prepared for his future with the help of the Satanist commander played by Henriksen. In a favorite moment Damien gets into a historical trivia battle with his teacher. A vivid sense of fatalism and quiet terror pervades the film.

The "death by design" sequences reminded me of the underrated Final Destination films, as most of them involve freak mechanical accidents (also an ice rink and a crow.) Wintry and wicked in its logic, I remember this one frightening me as a kid, surprisingly underrated on re-watch.

Posted by Eric Gilliland at 1:14 PM