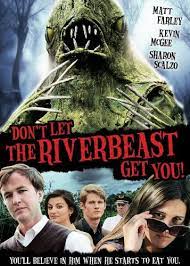 Motern Media is the cinematic universe of Matt Farley and Charles Roxburgh. Based in New England, they typically release a movie every year with their own stock company of actors who appear in most of their films. It's difficult to describe their movies, you have to experience them yourself. The films defy genre, usually blending different ones into the story. Don't Let the Riverbeast Get You! is one of the jewels in their canon.

Going by the title and poster art you would conclude you're about to watch a spoof of Creature from the Black Lagoon. That's not wrong, but there's deadpan humor, unnatural dialogue, musical sequences, romantic comedy, and a confrontation with the titular riverbeast. It's also the story of Neil Stuart (Matt Farley) a once famous English tutor returning to his hometown after leaving in disgrace years before after being left alone at the altar. Meanwhile, the dreaded riverbeast is terrorizing locals.

The dramatic structure is Shakespearean with multiple subplots and romantic intrigue. You meet a variety of characters. All sides of human nature are explored from the heroic to the cowardly. If I had to describe the humor, The Simpsons comes to mind, the Zucker Brothers, Monty Python, and old school screwball comedy. Well versed in low budget horror movies, especially those of the regional variety, are also a major influence.

Chances are you may dismiss the movie as bad in the first 10 minutes, but if you get in synch with its tone and rhythm it will become an annual re-watch.  ****

You can purchase the Blu-ray here:

Posted by Eric Gilliland at 9:34 PM