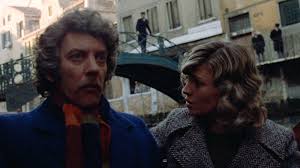 Never reliant on gore, jump scares, or cheap thrills, Nicolas Roeg's Don't Look Now is a remarkable modern Gothic full of dread and fatalism. The first and last five minutes mirror each other in devastating ways.

Donald Sutherland and Julie Christie star as John and Laura Baxter a formerly happily married couple grieving the death of their young daughter. John has taken a job in Venice leading the restoration of an old church. The Venice setting adds to the haunted mood of the film, the city is gloomy and rainy, literally dripping with history. Every corner and tunnel loom as portals into underworlds of mystery. All the Christian iconography and Renaissance art perfectly tap into the film's idea of time spinning in erratic orbits.

Strange things begin happening to John and Laura. They encounter two elderly sisters, one of whom is a clairvoyant, claims to have visions of their deceased daughter. Laura begins to develop a close relationship with the sisters, and her mood begins to improve. She and John rekindle their marriage in of Roeg's great sequences of bending boundaries of past, present, and future.

The sisters also warn John his life is in danger if he stays in Venice, meanwhile Laura must go back to London to care for their son who was in a minor accident. Meanwhile, there's also a rash of murders around Venice and John becomes a person of interest to the authorities. He also begins to have visions.

Don't Look Now is immersive in its sense of mood and setting. The mysteries linger. Not everything is explained, and the ending eschews any definitive interpretation. Questions are raised from the nature of coincidence to that of existence itself. Whether one is spiritual or secular in worldview, the film suggests reality is never what it seems nor are the forces within us and surrounding us.