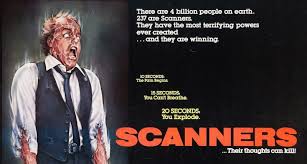 David Cronenberg's Scanners is dreary, strange, uniquely masterful. Watching it in the middle of day plays like a walking nightmare, at night a downbeat head trip.

Howard Shore's music over the opening titles is anxiety inducing, futuristic and full of dread. Then the opening scene at a shopping mall where protagonist Cameron Vale (Stephen Lack) unintentionally uses his telekinetic abilities to put two shoppers into a deadly seizure. Vale's later informed by Dr. Paul Ruth (Patrick McGoohan) he's a "scanner", a gifted individual who can harness the power of his mind. Dr. Ruth is affiliated with a company working for the military-industrial complex who view scanners as a national security issue, while he believes they are the next stage of human evolution.

Meanwhile, a renegade group of scanners led by "Revok" played by Michael Ironside at his creepiest have their own diabolical plans. It's a revealed an experimental drug called ephemerol was used in the 1950s causing the mutations, a parallel to thalidomide (which deformed children). Revok is sending assassin squads against other scanners not joining him.

Cronenberg's violence is bloody and nasty. The strikes by the hit squad eerily parallel mass shootings. Every scanner struggles with their sanity. One uses art as therapy to deal with the voices in his head, while others act out in more extreme ways. Analogies can be made to drug addiction and mental illness in that many still blame violent acts on those two factors. The film also is prescient in portraying the growing power of big pharma. Good scanners who have learned to live with their condition have their own support groups and form supportive communities, while the diabolical ones use their gift (or curse) for power.

Scanners presents a gloomy world of psychokinetic death squads, exploding heads, and body transference that would influence pop culture, specifically the TV shows of Chris Carter and J.J. Abrams.  The human condition in Scanners is both powerful and fragile, ripe for exploitation yet always seeking a transcendence.

Posted by Eric Gilliland at 7:55 PM