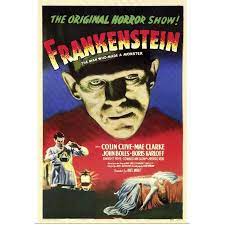 Along with Tod Browning's Dracula, James Whale's Frankenstein marked the year 1931 as a watershed for the horror genre. Released as the Great Depression was wreaking havoc and fear in America and the world, monsters hit a major nerve with the public. While Frankenstein has long transcended its shock value, it remains iconic.

A loose adaptation of Mary Shelley's classic 1818 novel, the film leaned more its folkloric elements, quite like the Golem from Jewish traditions. When the brilliant, but mad, scientist Henry Frankenstein played by Colin Clive in a nervy performance, conducts experiments to reanimate the dead from dug up corpses. But his assistant Fritz makes critical mistake at the last minute by selecting a "criminal brain."

The "It's Alive" scene is one of the most memorable in film history. Whale creates a frightening atmosphere of science gone wrong and hubris as Henry proclaims himself a God. Boris Karloff as Frankenstein has limited screen time, but you cannot look away when he's on screen. The creature's tragic encounter with the little girl was censored for decades, it remains chilling to this day.

Wedged in between the sequences with Karloff are more stagy scenes with the Frankenstein family. While the Shelley novel remains a timeless meditation on what it means to be human, the film climaxes with a warning about mob justice as the crowd takes out its anger on the creature, the ultimate example of being treated as the other by the masses. Karloff's performance elicited both empathy and compassion.

At 70 minutes, Frankenstein now plays like a museum piece, a journey into the psyche of another time that continues to echo into our own.

Posted by Eric Gilliland at 1:35 PM