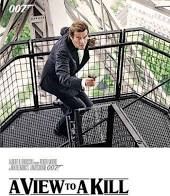 Conversation between myself and a 007 Fan.

Eric: Yeah, I was sort of dreading this one. My least favorite Bond film.

Eric: A few years ago. This time I stuck to youtube clips.

007: Let's start with the opening sequence.

Eric: I know some fans love it. "According to Wikipedia" it led to the popularity of snowboarding.

007: Still, it looks like an outtake from a previous movie.

Eric: And they use "California Girls" for no reason. Not even The Beach Boys version!

007: Remember David Lee Roth did a famous remake around that time, an attempt to connect with the MTV generation?

Eric: There's an interview on youtube of Roger Moore promoting the film on MTV, very awkward.

007: Octopussy would've been a suitable finale for Moore. He's noticeably aging in this one.

Eric: As many pointed out in 1985. Moore was appalled when he discovered he was older than the mother of his love interest played by Tanya Roberts!

007: Yeah, there's a creep factor for sure. A more age appropriate actress would've been a wise move. What about the villains?

Eric: Christopher Walken would become known for playing great villains. Here he's not memorable. Not sure why. Perhaps they held back, King of New York remains one of the great performances of all time.

007: Grace Jones makes for an interesting presence, but the script never lets the characters do anything besides fight and spout one liners.

Eric: The action scenes are never too engaging. The movie borders on parody at times, Zucker Brother type stuff. The Zuckers doing a Bond send up - there's an idea.

007: The idea of an aging Bond is an intriguing one.

Eric: Right, a film marketed as Bond's final mission or something like that would be great. Here he still acts like he's still 35.

007: The music video is better than the movie! Anything on the actual plot.

Eric: Not really, a plot to blow up Silicon Valley. The San Andreas bit was taken from Superman!

Eric: Well, some people love it.

Eric: A new Bond film is still an event.

007: I'm just waiting for No Time to Die to finally come out!

Posted by Eric Gilliland at 10:55 PM No comments: 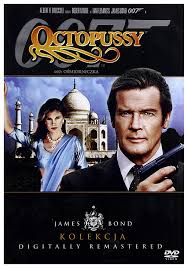 Octopussy is one of the more underrated Bond films. Perhaps it's due to the ridiculous title. Or maybe it's the lack of an awe inducing sequence. Even some of the lesser entries are remembered more if they have at least one great stunt. That's not meant to be a criticism of the film at all, director John Glen crafted a smooth narrative from start to finish, unconventional in a stealth sort of way. Moore's sixth outing as 007, the story makes light of his age, especially in a bittersweet scene with Miss Moneypenny as she's training her protege.

A classic and even somewhat realistic Cold War plot involving a rogue Soviet General Orlov played by Steven Berkoff who made a career playing Russian bad guys (also a respected playwright) is scheming to break up N.A.T.O. and thereby cause a geopolitical earthquake in Europe. Bond traces some Faberge Eggs to the plot and discovers that Orlov is working in tandem with Afghan soldier of fortune Kamal Khan (Louis Jordan). Using two villains was a nice touch, changing the dynamic of what's expected in a Bond film. 007 is then led to a mysterious woman known as Octopussy (Maud Adams), an entrepreneur playing both sides.

The tangled plot resembles From Russia With Love with its layers of intrigue. Even the stunts and fight scenes display a nice range from the grandiose to the tactile, such as Magda's (Kristina Wayborn) Rapunzel type inspired escape from Bond. A train chase and a climatic fight on an airplane deliver as premium action scenes. On location filming in Berlin and India also provided a scenic travelogue.

Octopussy grossed better than the competing Bond film Never Say Never Again. Released in June, it would earn sixth place in U.S. Box Office during the summer when Return of the Jedi dwarfed the competition. The theme by John Barry and performed by Rita Coolidge suited the textured and well worn tapestry of this late stage Moore entry.

What She Said: The Art of Pauline Kael 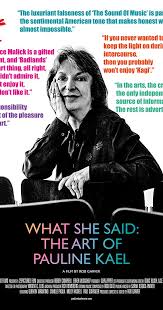 The landscape of film criticism has changed considerably since the 1970s, which was the heyday of film critic Pauline Kael. She wrote iconoclastic reviews with a unique style, literary and confrontational. The documentary serves as a primer on Kael's life and work, although the best place to go is to read her books. Kael's ability to bring an academic and popular sensibility to criticism remains influential.

Kael grew up in California and set out to be a writer early on. A single mother, she raised her daughter while trying to earn a living as a writer, working as a nanny and other service jobs. Eventually by the early 1960s her writing started to gain attention. In 1965 she became the film critic for McCall's magazine, but was fired after she wrote a negative review of the 1965 film The Sound of Music.

Kael championed films as popular art. Her reactions were unpredictable, but compelling. She dismissed Stanley Kubrick's 2001: A Space Odyssey for being shallow and redundant. Dubious of blockbusters, she panned Raiders of the Lost Ark, but loved Temple of Doom. Many misread Kael as an elitist, probably because she wrote for the New Yorker, but the documentary presents her as more of a proselytizer for cinema. Movies, a transcendent art, function as a portal to making sense of reality.

With the platform of the New Yorker which gave her unlimited space, her reviews were widely read and discussed. Her reactions were subjective and unpredictable, glowing praise with razor sharp criticism. Her favorable reviews for Francis Ford Coppola, Steven Spielberg, Brian De Palma, Robert Altman heralded the rise of New Hollywood. Her review of Bonnie and Clyde was a sort of manifesto for the new American cinema.

Those closest to Kael also appear in the film including her daughter who served as caretaker and typist. Filmmakers discuss her influence on their aesthetic, including Quentin Tarantino and David O. Russell. Her feuds and prickly relationships with her peers are also covered, and also how personal bias could also influence her reviews.

Neither does the film shy away from her cruel streaks. British director David Lean recalled being shaken after an encounter with her. Kael also demanded complete loyalty in her circle of friends, banishing anyone who disagreed with her. Being a woman in a male dominated field meant one had to be tough and uncompromising at times.

The gracefully argues Kael can make you a believer in movies, providing her readers with the courage to have a point of view.