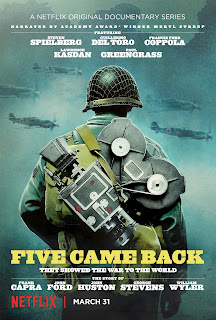 Before the war Stevens, Capra, and Wyler were known for making comedies and crtically acclaimed dramas.  Ford had built his reputation by directing historical films and Westerns like Young Mr. Lincoln and Stagecoach, while Huston was an up and comer known for The Maltese Falcon.  The Japanese attack on Pearl Harbor instantly mobilized Americans and these directors all wanted to serve in some way.

Ford, a hard drinking Irish-American, served in the Pacific theatre. He was present at the Battle of Midway and made a film based on the footage he shot.  Battle of Midway and many other films were heavily edited to reassure the homefront. Ford also supervised a film crew during D-Day, capturing the horror and desperation of the Normandy invasion.

Capra's assignment was to educate the public, most importantly the soldiers entering the armed forces. His series of films entitled Why We Fight did just that. After the war Capra started his own studio, Republic Pictures, which made only one film in its short existence, It's A Wonderful Life, which went unnoticed upon release.  The rest is history of course, few films better captured the spirit of post-war America.

Spielberg tells Wyler's story, a Jewish-American who lost family members to the holocaust. Wyler's documentary Memphis Belle followed a B-17 bomber crew that flew missions in Europe, getting footage Spielberg calls some of the most spellbinding ever put on film.  After the war Wyler directed The Best Years of Our Lives, a classic that captured the sense of lost time and sadness of the WWII generation, but also looked ahead to a brighter future.

George Stevens filmed the brutal 1944-45 campaign that ended with Germany's defeat.  He also took part in the liberation of the Dachau concentration camp and made a film that was shown at the Nuremberg Trials as evidence of Nazi atrocities. Stevens was haunted by Dachau for the rest of his life.  His later film were more serious in tone and explored the nature of good and evil.

John Huston also saw his share of action.  His film The Battle of San Pietro was banned by the military for being too graphic for the public, it went unseen until 1982.  Huston also made one of the most poignant films of the war Let There Be Light, a documentary about a group of soldiers recovering from PTSD. Coppola named it one Huston's finest moments as a director.

Five Came Back also raises important questions about artistic freedom and democracy.  How does one be patriotic and critical at the same time? How do movies shape and control public opinion?

All the documentaries mentioned are also available for streaming on Netflix.
Posted by Eric Gilliland at 9:03 PM No comments: