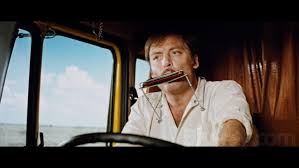 Road Games is the inverse of Spielberg's Duel, in this film it's the truck driver who must thwart the killer. Stacy Keach is magnetic as Jack of all Trades Pat Quid, a truck driver (don't call him that) hauling meat across Australia. Richard Franklin's direction hits all the Hitchcock beats, although I could not help to think of Peter Weir's Aussie thrillers like The Cars That Ate Paris.

A string of murders have the police and populace on edge and Quid even becomes a suspect himself as he picks up hitchhikers who find his behavior strange. Jamie Lee Curtis appears a young women he picks up and they form a sort of partnership. Everett De Roche's sharp dialogue and Brian May's (not from Queen) score is suspenseful with elements of classic Western and Bernard Herrmann.

The setting is established well. The highways look and feel desolate, filled with eccentric and menacing characters. The Who's "Going Mobile" also came to mind:

I can pull up by the curbI can make it on the roadGoin' mobileI can stop in any streetInvite in people that we meetGoin' mobileKeep me moving, mmm

Posted by Eric Gilliland at 8:38 PM