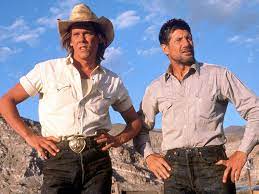 Released in January of 1990, Tremors has persisted as one of the most enjoyable monster films ever made. It's also an excellent gateway movie for horror, the blend of scares and comedy have aged quite well.

Kevin Bacon as "Valentine" and Fred Ward as "Earl" are handymen in Perfection, Nevada. Bored and looking for better opportunities elsewhere, they will soon be battling giant worms. When locals begin to get terrorized by strange creatures, the small population find themselves under siege at the general store and eventually end up in the desert for a duel.

The supporting cast adds to the charm. Michael Gross of Family Ties fame steals scenes as a conspiracy theorist prepper along with country music star Reba McEntire as his straight talking wife. Today there would be much more sinister edge to these characters, but it was 1990 and conspiracy theorists were mostly non-threatening.

At the heart of Tremors is the chemistry between Bacon and Ward, their banter was a step above most b-movies. Ron Underwood's direction was sharp, making for a fun and swift moving 95 minutes.

Posted by Eric Gilliland at 6:57 PM