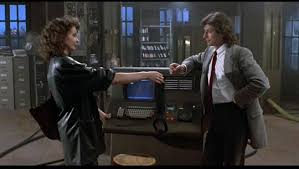 A tragedy disguised as a horror film, David Cronenberg's visceral and hauntingly grotesque remake of the The Fly, is propelled by a razor sharp script and humanistic performances by Jeff Goldblum and Geena Davis.

Seth Brundle (Goldblum) is a brilliant scientist who's isolated himself from most human interaction. He meets science journalist Veronica (Geena Davis) who takes an interest in his work in teleportation and they eventually fall in love. Eager to share Brundle's work with the world, Veronica must fend off her editor Stathis (John Getz) who wants to take credit for the scoop. One night in a drunken fit of jealousy (he believes Veronica is also seeing Stathis) Brundle teleports himself unaware a fly entered the chamber.

A main theme in Cronenberg films is how we evolve as human beings. In the first half we see Brundle's confidence and hubris grow as he prepares for the fame and adulation that will come with his scientific breakthrough. The nuances in Goldblum's performance are subtle. In an early scene he complains of car sickness and his fear of vomiting, am ironic foreshadowing of what's to come. As he begins to transform, Brundle becomes more physically and sexually aggressive, the first step in his metamorphosis into insect.

As he begins to physically transform, the film becomes a symphony of dread and macabre fascination. Many in the 1980s saw parallels to the AIDS epidemic, a disease mostly afflicting young men in their prime of youth. Cronenberg later stated he viewed it as a metaphor about the fear of aging and disease, specifically cancer. Brundle refuses treatment fearing he will be just another "tumorous patient."

Seeing Brundle become something else that's ugly and frightening is when the real scares start. He begins to vomit on his food before eating (like a fly), strange fluids come out of his body, and his entire physicality alters. In time his psychology changes, his musings on "insect politics" are unsettling, an existence of unalloyed aggression with no morality. In perhaps the most tragic line, "I'm an insect who dreamt he was a man and loved it. But now the dream is over . . . the insect is awake."

The Fly also draws upon classic literature such as Frankenstein and The Metamorphosis. Anxieties over the human body and psyche undergoing rapid change were Cronenberg's specialty in most of his previous films Shivers and Videodrome. The performances of Goldblum and Davis bring a humanity to the story, we truly feel awful for these characters. The focus on birth and decay imagery provides an unsettling dilemma for the audience as well when considering our own vulnerabilities, a sign of the film's enduring power.

Posted by Eric Gilliland at 8:59 PM