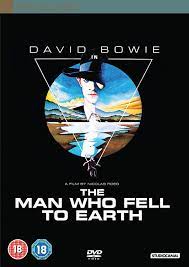 Nicolas Roeg's vibrant adaptation of the 1963 novel by Walter Tevis The Man Who Fell to Earth is a product of the 1970s just as the novel was of the early 1960s. The book was a Sci-Fi satire of Space Age America, while Roeg focused on the entropy of modern life. The story imagines a visitor from another planet, who goes by the name Thomas Jerome Newton, on a mission to use the resources and technology of earth to help save his dying planet. Starring David Bowie, ideally cast because of his own fascination with Sci-Fi personas, emerges as a unique anti-hero of 1970s cinema.

The film begins with Newton landing in New Mexico (Kentucky in the novel) and adapting to a new environment his biology wasn't designed for. He begins to acquire wealth by selling rare jewels and earning patents due to his vast scientific knowledge. Supporting characters include a patent attorney played by Buck Henry, Rip Torn as a chemistry professor who becomes a confidante to Newton, and Candy Clark as Newton's caretaker/lover.

A recurring issue with the film is that while all these characters are interesting, their relationships never quite work. Rip Torn is almost a separate movie as a brilliant, womanizing professor (in the novel a he's misanthropic loner), while scenes between Bowie and Clark are often aimless, even a little awkward. Buck Henry, always a compelling screen presence (and maybe the all-time greatest SNL host), is under developed as a rare gay character in a 1970s Sci-Fi film.

Yet Bowie's charisma and Roeg's fascinating visual style are enough to sustain the film that feels like a real journey by the end. Newton is a humanoid, but his anatomy and biology function differently than human beings. In time he develops a taste for alcohol, becomes addicted to television, eventually losing focus on his mission. The government discovers Newton and takes him captive and conducts painful experiments on his body. The odd reality of the world in the movie prevents any Twilight Zone type twists, and instead becomes a meditative story on the corrosive influence of modern human civilization - even on a visitor from an advanced planet.

The novel leans more into Cold War anxieties surrounding nuclear war. Throughout, Newton surmises the earth has only a few decades left before self-destruction, leaving him baffled at how a planet rich with so much water and natural resources rare in the universe (his own planet is nearly out of water) could behave so recklessly. Like the protagonist in Tevis's later book The Queen's Gambit, Newton is a genius and, in this case, a literal alien struggling to live in a world of mediocrity and cheap consumerism, one where science has been coopted by the defense establishment.

Unfortunately, Bowie's own music wasn't used in the film due to contract issues. It's easy to envision Bowie starring in a version of his own Sci-Fi concept album The Rise and Fall Ziggy Stardust, which may have proved to have been richer source material. Roeg was clearly more interested in the sexual aspects of the story, inspiring some of the more outlandish sequences. Yet the sense of alienation and fragmentation in The Man Who Fell to Earth leaves a resonance, making it one of the most iconic Sci-Fi films of the 1970s.

Posted by Eric Gilliland at 9:17 PM