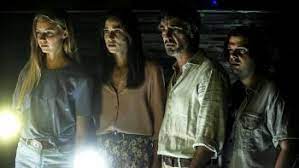 Opening with a group of young people traveling in a RV obviously recalls The Texas Chainsaw Massacre, the characters at first come off as superficial but all are allowed to develop. When a wreck leaves them stranded it leads them to take refuge in a cabin hidden in a deep forest, well, you get the idea. They discover many frightening things there including a local cult practicing human sacrifice and medieval torture. While its never exploitative, a definite mood of dread sustains the narrative.

The character building scenes are effective with Eliza as a young woman dealing with pregnancy and a film student Fabrazio who is not what he appears to be. More character scenes may've made the film even stronger. The reveal at the end felt plausible within the confines of the movie. Well directed and thoughtfully acted, the film is full of surprises and some truly squeamish moments.

Posted by Eric Gilliland at 8:56 PM