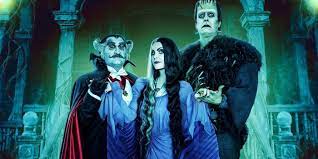 Rob Zombie's foray into family entertainment, a reboot of the beloved 1960s sitcom The Munsters, has been a dream project he's had in development for years. The results are mixed. I'll say this, I liked the Spree (the candy) color scheme, it has an original visual style. The look is somewhere between classic Tim Burton and a Disney World attraction. Unfortunately, the film is consistently unfunny, needlessly plot driven, and way overlong for sitcom style feature.

Jeff Daniel Phillips and Sheri Moon Zappa lead the cast as Herman and Lily Munster. I found their performances to be one note, not so much uninspired but sinking under the onslaught of corny jokes and repetitive physical gags. Unlike the orginal series, the film is an origin story of how they meant, Herman is a wannabee TV star, while Lily is lovelorn and wanting to break free of her father Grandpa Munster played Daniel Roebuck. There's just not much to the cast of characters other than their goofiness that's never endearing. By keeping the humor on a 1960s sitcom level with no attempt to update for 2022 was obviously intentional and appealing to hardcore fans of the series. In the end, this gleefully anachronistic approach comes off as misguided and at worst grating.

While watching I wondered who the audience was for this labored, but well intentioned, reboot. One may find originality in the borderline anti-comedy/hip to be square approach, or (including myself) a barely memorable curio of pop culture nostalgia.