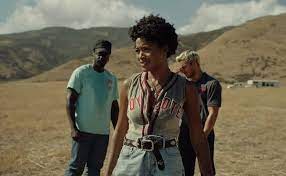 Jordan Peele's Nope may complete a trilogy of Horror-Sci-Fi thrillers that began with Get Out (2017) and Us (2019). Get Out put an original spin on the body snatchers mythos, while Us paid homage to '80s horror, especially the films of George Romero and John Carpenter. Nope may be the most ambitious the trilogy, Western imagery and showbiz mythology loom in a Sci-Fi scenario.

The sound design is fantastic, totally enhancing the theatrical experience. The sound utilized an assortment of animal, weather, and digital sounds. A subtheme running through the movie is film vs digital. Michael Abels' score draws inspirations from Jaws-Close Encounters of the Third Kind era John Williams, with added majestic Morricone flourishes with a satiric edge.

Without revealing too much of the story, Daniel Kaluuya and Keke Palmer star as siblings O.J. and Emerald Haywood. The Haywood family has a long history of being horse wranglers for the film industry. They also own one of the oldest ranches in California. O.J. is introverted and prefers focus on running the ranch, while Emerald handles the business side.  There's a subplot involving an incident with a chimp on a '90s sitcom set, a closely guarded secret by the industry. Steven Yuen appears in a supporting role as a child actor who starred on the sitcom and happens to live near the ranch - he's since reinvented himself as a reality TV star.

Nope works on multiple levels. There's the main story of the mysterious phenomena around the ranch. On a deeper level the film is interrogating representation in Hollywood history, how minority performers were either invisible or present to make the white actors look good, especially in horror and Sci-Fi genres. Get Back expressed how the post-racial moment in America was illusory as the Obama era closed out, while Nope speaks to the continual struggle of the culture at large in 2022 to reckon with the past.

Peele draws upon Sci-Fi and Western iconography; his characters are likable and act with courage and dignity. Embedded in the story, not unlike M. Night Shyamalan's Signs, is also a sense of hope and renewal. The intricate climax is handled with grace, Peele keenly navigates clichés and approaches them from different angles. Some have criticized the film for not fully fleshing out the characters, but I think the minimal exposition works in its favor.

Like Spielberg, Peele's visual narrative style seamlessly blends everyday objects with the fantastical. The sense of the past constantly informing the present leaves a strong impression. I wonder if Peele will continue making genre films, or like Spielberg, branch into other areas like historical epics or literary adaptations. Either way, I hope the movies keep coming.

Posted by Eric Gilliland at 3:18 PM