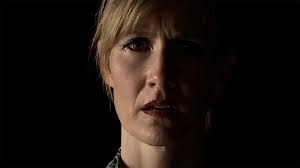 Today I went to see David Lynch's most recent feature film, the enigmatic Inland Empire. Starring a mesmerizing Laura Dern in multiple roles, all variants of the same character, as they traverse though a dreamscape. Not so much a greatest hits type movie, but a culmination of all Lynch films. Shot on a grainy digital camera, it looks and feels like a movie you might find in the deep archives of a famous artist like Lynch. Fragmented and indulgent, yet endlessly captivating and intriguing. There's the surrealism of Eraserhead and haunted Hollywood vibe of Mulholland Drive, and a fascination with the identity shifting as explored in Lost Highway and the voyeur aesthetic of Blue Velvet. Beauty and ugliness are intertwined with a total devotion to dream logic. There's also a sense Lynch and his cast totally gave themselves over to the material, letting it take them where it may. There's many subplots all vaguely connected including roving Polish gangsters, a dysfunctional family of talking rabbits, a group of young women wandering around Hollywood who break into spontaneous dance routines, a troubled film production, and of course the requisite murder mystery. Saying none of it makes sense misses the point, it's the pure ecstasy of a head trip into the subterranean. Lynch has rebranded himself since 2006 as a weatherman and spiritual guru among many other things, Inland Empire is FILMMAKER David Lynch in its highest form. If feasible, do yourself a favorite and see it during this limited engagement. ****
Posted by Eric Gilliland at 9:54 PM