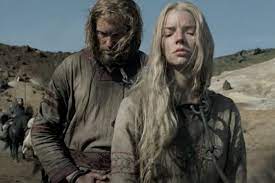 Sword and Sorcery epics underwent a bonanza during the 1980s spurred by John Boorman's Excalibur and the John Milius classic Conan the Barbarian which launched many equally beloved imitations. Recent attempts at Arhturian epics have floundered from the Anton Fuqua's 2000s effort to Guy Ritchie's recent bomb Legend of the Sword. Robert Eggers has built a film career by crafting historical epics told from a mythological perspective (The Witch and The Lighthouse) and The Northman ups the stakes, a transition from the Indie to the big budget realm. Filmed in Iceland and Northern Ireland, The Northman is a full on Viking tale of revenge, a rough hewn version of Hamlet. The story is simple enough: young Amleth (Alexander Skarsgard) witnesses his father King Aurvandill (Ethan Hawke) being murdered and escapes to Russia and plot revenge. Like Excalibur, Northman is fascinated with how civilization emerged out of the muck, riddled with violence and superstition. The cinematography is vibrant, drenched in blood and mist. Nicole Kidman and Anya Taylor-Joy are given strong female roles, giving their characters depth and a fierce will in the hyper- masculine climate. The story is told and even feels like a piece of iron being forged, committed to evoking the distant past (may also inspire some idiotic male behavior).
Posted by Eric Gilliland at 7:16 PM

Email ThisBlogThis!Share to TwitterShare to FacebookShare to Pinterest
Labels: 2022