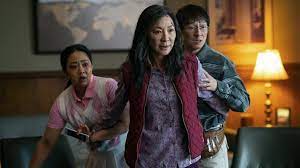 .
Where does one even begin? Everything Everywhere All At Once will be a film to reckon with in 2022 and beyond. From its inception, film as a medium has played with our sense of reality. I can think of few films that have done it better: imagining the possibility of experiencing a multitude of different realities simultaneously with a rare virtuosity. For the first 10 minutes the film appears to be a kitchen sink story of a Chinese-American family trying to make ends meet running a laundromat. Michelle Yeoh stars as Evelyn Wang, on the cusp of a divorce with her husband Waymond (Ke Huy Quan), while struggling to connect with her wayward daughter Joy (Stephanie Hsu). Without revealing too much, the film smartly lets you know (Directed by the "Daniels' team) early you're in for a disorienting ride through multiple realities, experiencing the characters in many different guises. Yet the film stays grounded and never loses focus. Yeoh carries the film along, holding the entire saga together. Quan, a child star of two iconic '80s films Indiana Jones and the Temple of Doom and Goonies) is incredible as well. By turns hilarious, downright strange, and wonderfully moving, EEAAO delivers a unique cinematic experience. It will be a film destined to launch thousands of college essays - and prove to be a touchstone of the decade.
Posted by Eric Gilliland at 10:20 PM

Email ThisBlogThis!Share to TwitterShare to FacebookShare to Pinterest
Labels: 2022