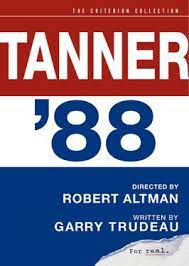 Tanner '88 was an 11-part mini-series directed by Robert Altman and written by Garry Trudeau that aired on HBO during the run up to the 1988 American presidential election. Starring Michael Murphy as underdog presidential candidate Jack Tanner, the series exists somewhere between reality television and mockumentary. Fictional events often take place alongside actual events, like in Haskell Wexler's 1969 "non-fiction film" Medium Cool. Tanner '88 is set during a transitional time in political history when old rules still reigned, new ones were being made, while many universal truths of politics still prevail.

A former congressional representative from Michigan, Tanner often appears as a vapid liberal tolling the 1980s Democratic party line. After eight years of Reagan, Democrats were on the defensive after losing by landslides in the previous two general elections. In off the cuff moments Tanner expresses an idealism that connects with young people. His fledgling campaign in New Hampshire takes off after a recording of him lamenting the loss of 1960s idealism in Reagan's America, in today's parlance, went viral. As the series progresses Tanner's campaign goes through a litany of ups and downs until a dramatic climax at the 1988 Democratic Convention in which he almost swipes the nomination from Massachusetts Governor Michael Dukakis (Dukakis easily wrapped up the nomination at the convention but would lose to Republican candidate George Bush Sr. in the General Election).

Shot on videotape, Altman's familiar style of overlapping dialogue and meandering camera are used to full effect. The film follows three sets of characters: the candidate Tanner, his staff, and the media. A young Cynthia Nixon co-stars his ambitious daughter Alexandria and Pamela Reed as his savvy campaign manager T.J. Cavanaugh. Many political figures appear as themselves including Bob Dole, Kitty Dukakis, Pat Robertson, and other minor celebrities from the era.

Now thirty years later Tanner '88 was prescient on a number of levels. Murphy himself is a dead ringer for the traditional Democratic candidate. Like Bill Clinton he would bring a 60s sensibility to his rhetoric but would get ensnared by interparty disputes and personal scandals (in the film Tanner is divorced but a media frenzy ensues when it's revealed he's having an affair with a staffer from a rival campaign). One may also find similarities with Al Gore and John Kerry. The Jesse Jackson campaign also figures into the story, the first African American candidate to nearly attain a presidential nomination. One episode depicts Tanner taking part in a protest the Apartheid system in South Africa, a vibrant part of campus activism during the 1980s. Many have lamented an insular streak plaguing the left recently, noting their concerning indifference to the Chinese crackdown on Hong Kong.

Comparisons to The West Wing are often made, but Aaron Sorkin and Robert Altman have vastly different sensibilities. If Tom Clancy novels served as fantasies for conservatives on how political leadership should work, The West Wing did the same for liberals. Fiction allows for those with political inclinations to fantasize about ideal political leadership, but Tanner '88 is more in the tradition of Gore Vidal (would Vidal have liked Hamilton?) Any politician will eventually have to compromise on their ideals, upset the ideologues who support them, and maybe become the very thing they hate. One could easily see Tanner going down such a path, there's an unfashionable cynicism embedded into the story.

Or modern audiences may find Tanner '88 too tame in our period of polarization, decline, populism, fascist flirtations, and all within the vortex of social media. One may even find it naïve and nostalgic for a time when the threat of violence did not hang over national elections. Yet the America of 1988 and 2021 aren't so apart from each other: all politics remain local. The same issues continue to plague the country.

Altman and Trudeau sat down for a discussion for the Criterion Edition, and both fondly remembered the project. The 2004 release also featured updates before each episode with the series principals reprising their roles. In 2019 Murphy returned as Tanner for the 2019 Martin Scorsese film Rolling Thunder Review: A Bob Dylan Story.

Posted by Eric Gilliland at 1:03 PM