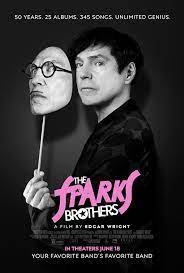 The Sparks Brothers may not be household names, but chances are you've come across their music in some form along the way. I recall their appearance in the 1977 disaster film Rollercoaster, always thinking they were a fake acid rock band from the era. But they are in fact very real, recording 25 albums over the past 50 years. The documentary The Sparks Brothers directed by Edgar Wright (a big fan himself) covers the many ups and downs of their not so well-known career. Natives of California, Ron Mael and Russell Mael as Sparks defied convention at every point in their career, an approach that both boosted their reputation among their peers, but the popularity that many of the musicians they inspired went on to have, especially in the punk, post-punk and New Wave genres, eluded them. The documentary does an admirable job of navigating the ramshackle path of their career, the recurring motif being they were always ahead of the curve. Talking heads ranging from Beck to their other associates also contribute much to the film. Even Paul McCartney himself gave Sparks a shout out on his 1979 "Coming Up" video. The year 2021 may finally be their breakout year with a popular documentary and the acclaimed film they wrote and scored entitled Annette.
Posted by Eric Gilliland at 9:37 PM