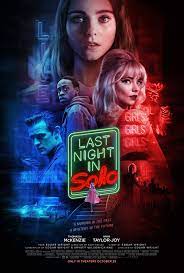 Edgar Wright's latest Last Night in Soho channels the energy of Swinging '60s London in a fantastical story that's also set in the present. With two strong female leads in Thomasin McKenzie and Anna Taylor-Joy and a supple soundtrack of deep cuts of British rock and pop music from the Mid-1960s, the film builds a momentum that sustains itself even when the story gets a little murky.

Eloise (McKenzie) begins the film by learning the news she's been accepted into a London fashion school, her dream come true. Enamored with everything about the 1960s from the music to the fashions, she soon finds herself literally transported to the era. Upon arriving in London, she's picked on by her snooty roommates for being a country mouse lacking in style and charisma. Feeling like an outcast, Eloise decides to rent a room in an old neighborhood with somewhat foreboding landlady with strict rules. But it's quieter and allows for privacy. But then things begin to get a little strange.

At night she finds herself inhabiting 1965 London, sort of possessing the spirit of Sandy (Taylor-Joy), an ingenue on the London scene trying to make her way as a singer. Jack (Matt Smith)claims to have connections to the music business and romances Sandy, making big promises along the way. In time Sandy finds herself ensnared into the London underworld. Meanwhile, Eloise begins to adopt Sandy's persona in present day London as their identities begin to converge. Sandy provides Eloise with a newfound confidence as she begins to excel at school.

A sense of foreboding begins to take over the story as the second half moves into thriller and horror territory. The past Eloise romanticizes no longer looks that great as she begins to realize there are ghosts everywhere. Wright's approach to the scares mostly reminded me of Kubrick's in The Shining, there's an old timey haunted house look, while evoking the unspoken horrors of the past, perpetuated by older men on young women.

The vividness of the visual and sonic landscape makes up for some of the weak points in the story, which nearly careens into incoherence during the final 20 minutes. McKenzie was perfectly cast as Eloise, coming off two memorable performances in Jojo Rabbit and Leave No Trace. Taylor-Joy, unforgettable in The Queen's Gambit, is never fully developed as a character although she does have some memorable moments. To its credit, Last Night in Soho is never boring, Wright's passion for cinema is evident in every shot. One may complain about style being highlighted above narrative cohesion, but I don't see that as a negative in this case, a compelling journey most of the way through.

Posted by Eric Gilliland at 2:11 PM