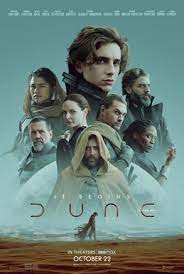 Frank Herbert's classic 1965 novel Dune changed the landscape of science fiction with its deeply embedded themes of history, politics, religion, and ecology. Many filmmakers took inspiration from the novel, it screamed for a cinematic visionary to put it on celluloid. Chilean filmmaker Alejandro Jodorowsky began pre-production on an adaptation during the mid-1970s but funding for the project fell through. The story is told in the fascinating 2013 documentary Jodorowsky's Dune. The first adaptation arrived in 1984, directed by David Lynch who was coming off his underground hit Eraserhead and a brilliant adaptation of The Elephant Man, critics were unkind to the film, but it's gained a loyal following.

The newest version directed Denis Villeneuve who is coming off two strong Sci-Fi movies Arrival (2016) and Blade Runner 2049 (2017). The ambition and scope of Dune is a natural progression from those two films. Delayed by the 2020 pandemic, Warner Bros waited until the time was right for a theatrical release. Unlike the Lynch version, the 2021 Dune has mostly met with a positive reception. Is this Dune a better film than the Lynch version? It's hard to compare the two since both are from different eras and sensibilities but played back-to-back they complement each other nicely.

I'm a fan of Villeneuve's previous two films and Dune is visually and stylistically much in line with Arrival and Blade Runner 2049 (specifically the yellowish-gray sheen). While there's a coldness and seriousness to his films, they're also immersive and unique in their approach. They don't look or feel like a DC or Marvel movie, nor any of the other franchises currently in vogue. Although he's often compared to Christopher Nolan, I see Ridley Scott as more of an influence. Villeneuve's films are insular contained worlds not unlike Alien or Blade Runner (no coincidence he made the sequel).

Dune is known for its complexity and dense approach to genre, so plot synopsis is limited. Set in the year 10,191, the plot involves galactic intrigue between the Houses of Atreides and Harkonnen centered on the desert planet of Arrakis. The planet is home to "spice", the most valuable natural resource, making intergalactic travel possible and contains hallucinogenic properties, a combination of oil and LSD?

The protagonist Paul is played by Timothee Chalamet, heir to the Atreides dynasty ruled by his father Duke Leto (Oscar Isaac) and his mother Jessica (Rebecca Ferguson) a member of the mystical sisterhood. Their dynasty is presented as noble as opposed to the militaristic Harkonnens. Many notables appear in the cast including Josh Brolin, Zendaya, Dave Bautista, Stellan Skarsgard, Charlotte Rampling, Jason Momoa, and many more. While every actor gets a moment, they all feel a bit too brief.

The first half of the film is especially strong, world building and character introductions are well done. There's a grim tone evoking the darkest days of the Second World War when the Nazis were on the cusp of mystery, things are stark and intense. There's also a sense of mystery and even wonder - a rare thing in movies these days. In the second half things get muddled, but does build to a meaningful climax to set up the second film.

Will Dune have the momentum to become a phenomenon along the lines of Lord of the Rings or Star Wars. The ecological themes in the story are part of the zeitgeist, Herbert was certainly ahead of the curve by focusing on environmental themes.  A main drawback will be the lack of likable characters, the protagonist Paul is built as the hero, but his character is complex and off putting at times. Neither am I sure if the movie will leave audiences with the same resonance from a film like 2001: A Space Odyssey. Dune is about power, politics, and ambiguous morality. It keeps the audience at a distance.

Hans Zimmer's score is atmospheric and bombastic. The production and costume designs are impressive. But Dune is a vision, a bold one drawing based upon rich source material, providing an experience. A cultural phenomenon? I'm not so sure.

Posted by Eric Gilliland at 1:49 PM