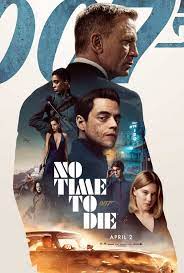 No Time to Die is the grand finale to the Daniel Craig era of James Bond movies, it's the Abbey Road of the 007 series, with a "one last adventure" vibe running through the entire film. It's nostalgic, but also looking into the future of what the next phase of franchise might look like. While the filmmaking of Paul Greengrass and Christopher Nolan have informed the Craig era, Cary Fukunaga's surefooted direction provides a cinematic quality rooted in the past films of the series, but also more seamless and kinetic than its predecessors. Fukunaga brings an organic quality to the action sequences and allows the characters to breathe, allowing the almost 3+ running time to run smoothly. Scenes never feel rushed or routine, all the characters are nicely integrated into the story.

The extended opening sequence sets up the story with Bond tying up some loose ends from a previous storyline only to his life put on a new trajectory by what he discovers. Lea Seydoux is back as Dr. Madeline Swann, Bond's love interest from Spectre who's also given a meaningful arc here. There's an echo of The Dark Knight Rises in the first section of the movie, as five years pass with Bond going off the grid and becoming something of a legend. He's inevitably called back to the Secret Service over a deadly threat presented by SPECTRE.

Familiar players also return with Naomie Harris as Miss Moneypenny, Ben Whishaw as Q, and Ralph Fiennes as M (really channeling Bernard Lee this time around). Jeffrey Wright, absent since Quantum of Solace, reprises his role as Felix Leiter. Newcomers to the cast include Ana De Armas as Paloma, a fellow agent who helps Bond and Lashana Lynch as "00" operative who will also become a partner of sorts to Bond, representing the new generation of MI6. Rami Malek plays the villain "Safin" providing an emo quality to the villains that's common in the Craig era, at the same time draws upon traditional supervillain tropes from the 1960s.

No Time to Die surprisingly takes a lot from the Connery era of films and the one entry with George Lazenby On Her Majesty's Secret Service. John Barry's music is present throughout and there's a villain's lair reminiscent of the Ken Adams sets from You Only Live Twice and The Spy Who Loved Me. Many may quaff at the tendency of these Bond films to serialize and mimic the Marvel approach to movies. But the series has always been influenced by what's going in cinema at the time. While the Connery movie reinvented the espionage genre, by the fourth entry Thunderball the series began to be influenced by other films.

That's why the Abbey Road comparison to No Time to Die feels right. Like The Beatles (who Bond famously dissed in Goldfinger) the series remains rooted in the 1960s milieu. The final album by the Beatles was hardly earth shaking when it was released in 1969, the world was moving on without them and they would soon cease to exist as a living entity. But it's always great to revisit that last record! No Time to Die will feel like that in the extensive Bond canon, a pleasing finale to a hectic era in world history, further pronounced by the number of delays in its release due to the 2020-21 pandemic. James Bond Will Return - we're counting on it!