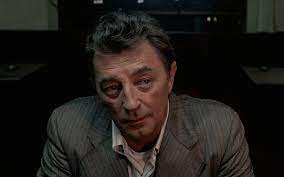 Based on the classic George V. Higgins novel, The Friends of Eddie Coyle is a pristine example of an adaptation that's both loyal and manages to build upon the source material. Directed by Peter Yates and starring Robert Mitchum as the title character, some of the best character actors from the era are featured including Peter Boyle, Richard Jordan, Steven Keats, and Alex Rocco. The story follows low level criminal Eddie Doyle as he faces multiple pressure from the Feds and his associates from within the criminal underworld of Boston. The hip score by Dave Grusin and and a documentary like feel for 1970s Boston creates an unmistakable vibe.

Eddie is low level player who often acts as a middle-man, the film begins with him arranging gun transactions for a gang of bank robbers led by Alex Rocco. Eddie's also facing jail time after getting arrested for transporting alcohol out of state. As a result, he's in frequent communication with a treasury agent Foley (Jordan) who wants to flip Eddie and use him as an informant. Coyle hopes to get out of his impending jail sentence if he can become an informant, yet at the same time recoils against the idea of becoming a full-time fink.

Although the story itself is rather simple, the underlying themes of desperation and existential angst that drives the film. The criminal life is depicted with a raw melancholy, Eddie simply wants to be able to pay the plumber. It's also a dishonest world where loyalty is finite, and danger always lurks. In a striking scene early in the film Eddie recounts to young gun dealer Jackie Brown (Keats) the time his hands were broken repeatedly after guns he sold were traced - resulting in high level players going to prison.

At the same time there's a sense of professionalism epitomized by the bank robbers who have an effective method of pulling off bank heists. The invade the bank manager's house in the morning, hold the family hostage, and then take the manager to the bank who then lets them into the safe. Treasury agent Foley (Jordan) wishes he were higher in the ranks of law enforcement, but does what he must do to get intelligence from low level criminals.

Perhaps it's the Boston setting, but there's a theology of sorts rolling through the film. A Catholic conscience lurks through the story (one character mentions performing acts of contrition), scenes at the diners, especially between Mitchum and Jordan, feel like confessions with their quiet tones in a classic noir setting. It's a world where the idea of God exists in a lip service sort of way, the only mode is survival. Justice starts to sound like a dopey utopian idea in the face of stark reality, one must make their decisions and live with them.

Peter Yates's direction provides a guiding hand throughout, his filmography reveals a strong ability to use settings to full effect whether it's the American Midwest in Breaking Away or a futuristic San Francisco in Bullitt. Inner suburban Boston is all row houses and parking lots. The autumnal feeling is evoked with great skill, you can feel the chill in the air. Solace comes in the form of a cup of coffee and a glass of beer on tap or watching Bobby Orr at the Boston Garden with a rowdy crowd.

The noir poetry of Eddie Coyle evokes a vivid portrait that's rooted in realism. The "little guy" hardly stands a chance in the face of the powerful and indifferent forces surrounding him. While the tropes are formulaic, there's nothing formulaic in the telling of the story. Mitchum is at his best as the aging criminal, while the direction and acting from the entire cast make Coyle a classic of '70s cinema.