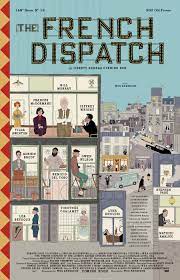 Wes Anderson specializes in creating worlds of the hyperreal, fantastical representations of the past. His 2014 film The Grand Budapest Hotel, a bittersweet film about Europe in the years leading up to The Second World War, conjures a lively human drama with a melancholy ending. The French Dispatch pays homage to midcentury journalism serving as a spiritual sequel to Budapest Hotel. Inspired by The New Yorker, the film shares four legendary stories from the fictional French Dispatch upon the death of its editor and chief Arthur Howitzer Jr., played by a stately Bill Murray. It's a departure from previous Anderson films in that it's an anthology, telling four separate stories set during different periods of the 20th Century.

"The Cycling Reporter" vignette stars Owen Wilson with him playing up his persona as a roving reporter in the fictional city of Ennui (Paris). "The Concrete Masterpiece" stars Benicio del Toro as a brilliant and volatile artist who falls in love with his jailer played by Lea Seydoux. When art dealers become aware of his work, he becomes a sensation among the intelligentsia.  "Revision of a Manifesto" stars Frances McDormand and Timothy Chalamet during the "Chessboard Revolution" student uprising (May 68). And finally, "The Private Dining Room of the Police Commissioner" features Jeffrey Wright as a food writer who gets caught up in all sorts of intrigue.

Anderson pulls all the stops with his signature visual style including vibrant colors, rotating from B&W to color, and even some animated sequences. Many Anderson regulars also appear, wouldn't it have been cool if Gene Hackman had come out of retirement? Each section recalls something of a lost era. Wilson as the happy go lucky photojournalist evokes an American enthusiasm for immersion in another culture, evoking an endearing sense of wonder and invention. "The Concrete Masterpiece" satirizes the media obsession with macho, temperamental artist. At the same time there's a nostalgia for a time when a painting could shake up the world.

"Revision of a Manifesto" is the most adventurous chapter as it follows the student leader (Chalamet) of a revolution agonizing over writing a manifesto and receiving help from seasoned reporter played by McDormand. The style looks and feels like a Godard film from the period (through the more precise eye of Anderson). Yet its patronizing tone towards the mythology of student/worker solidarity of May '68 borders on smug conservatism. The last tale is the most chaotic and tragicomic but held together by Wright (a James Baldwin/Truman Capote composite) as he relates his story about a legendary chef during a Dick Cavett type interview.

If The Grand Budapest Hotel lamented the loss of a more refined and harmonious world ended by crude modernism (for lack of a better ism), The French Dispatch imagines a past when Chaplinesque figures and sincere eccentrics shaped culture - for the better. One did not read books about how to be creative or think like an artist, it was about being present.

I've found Anderson's past films to be wonderful to look at, but shallow in their view of humanity. His recent films bear the same aesthetic of visual perfection, but also reveal an intriguing conversation with the past by creating characters who were fully engaged with their time and were also aware things were changing. I hope he makes a film set in more contemporary times to truly put his aesthetic to the test, as opposed to seeking cover in the grandeur of the past. I'm sure reading every issue of The New Yorker from 1945 to say 1975 leaves anyone with a literary bent drunk on romantic notions of witnessing and shaping their times.

The French Dispatch reveals Anderson is still at the height of his powers, the question is whether he'll continually take cover in an imagined past or deal more directly with the troubled present.