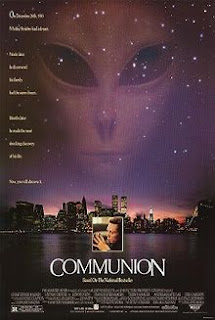 Based on Whitney Strieber's non-fiction book Communion about his alleged experiences with, in his words, "visitors", the 1989 film starred Christopher Walken (Whitney) and Lindsay Crouse (Anne). As a movie Communion is a curio if there ever was one. Walken returns to role similar to what he played in The Dead Zone, a man who emerges changed after a traumatic experience.

So if you combine Close Encounters of the Third Kind with a touch of the forgettable Fire in the Sky, Communion fits the bill. Whitney is a successful writer living in New York with his wife and son and appears to be content with his life. Walken played Strieber as a true eccentric, according to IMDB Strieber confronted Walken about making him look a little too nutty, Walken replied "if the shoe fits." During a weekend with friends at his country cabin Strieber experienced strange flashing lights at night. A few months later, he had an even more terrifying experience during the Christmas holiday.

Afterward his mood changes and he experiences mood swings that drive a wedge between him and Anne. Doctors find no evidence of physical problems; a brain scan comes up negative. But his disturbing nightmares and visions continues, leading Whitney to a psychiatrist. Through hypnosis he undergoes memories of an alien? abduction, with all too familiar stories of being probed, the visitors seem interested in human reproduction. Sent to a support group with people who had similar unexplained experiences, Whitney sympathizes with them, but decides to work things out himself. Eventually inner peace is recovered (Whitney even busts some moves with the greys) and his writer's block disappears.

In the years since Communion came out, Strieber continued to write and attempt to make sense of his experiences. The confusing "happy" ending seems to suggest, "well, I guess I'm just going to get along with these beings." Unlike other alien visitation films, Communion appears to be okay with placing alien abduction on the shelf with typical yuppie problems, no different than getting good seats at the Knicks game or getting the stock portfolio in order. You may be an interdimensional being that's in touch with the multiverse, it happens.

Walken achieves a memorable performance within some opaque material, and Crouse equals him in her patient attempt to understand his experiences. Sci-Fi and horror elements aside, Communion could be read as the story of a marriage holding together and overcoming mental health challenges. It works equally well as a testament to late '80s ennui among the creative class.

Posted by Eric Gilliland at 2:02 PM