The early rock and roll era is more distant than ever. A teenager who grew up in the thrall of Chuck Berry, Buddy Holly, Elvis Presley, and the rest is now an octogenarian. Nostalgia for the period peaked by the late 1970s and all the excitement it generated has mostly worn away, but still, the manic energy of the period with all its contradictions and flaws retains a bit of its spark. Maybe it's the insular nature of today, speaking of music as a revolutionary force in the culture sounds absurd and pathetically anachronistic. Yet to paraphrase John Lennon, the records are always there if you want to reminisce. In this case I'm looking back at three films about the era, all focused on the legend of Alan Freed, the Cleveland Disc Jockey who popularized the new music. Freed passed away at the age of 43 fifty-seven years ago this week. 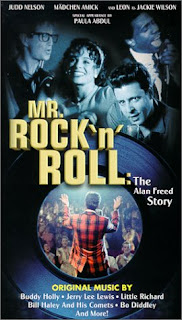 Mr. Rock n Roll: The Alan Freed Story (1999) The real Alan Freed starred in a 1957 film of the same title, which mostly featured him introducing a list of popular acts from the day, including a flashback to the day he supposedly coined the term "rock n roll." This made for television film starred Judd Nelson as Freed, alongside Madchen Amick (of Twin Peaks fame) as his fictional wife Jackie. Nelson's laconic performance focuses on Freed's rise in Cleveland, but also looks at the less savory side of persona, specifically his greed and ego, declaring a few times I INVENTED ROCK N ROLL. At the same time, he's portrayed as an ally to African American artists who drew the ire of J. Edgar Hoover. Paula Abdul appears in an unnecessary supporting role. At the very least there's a vague period flavor, but the structure's formulaic and uninspired.  ** 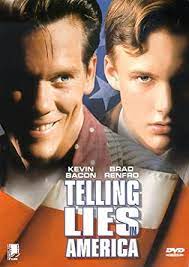 Telling Lies in America (1997) A partly autobiographical film penned by the master of erotic potboilers Joe Eszterhas. Set in 1950s Cleveland, Brad Renfro stars as 17-year-old Hungarian immigrant "Chucky" at odds with is peers, school and demanding father. He gets a job as a gopher for local Disc Jockey Billy Magic, played by Kevin Bacon in a magnetic performance. A variation on the Freed persona, Billy is openly corrupt and seeks payola payments. Yet his charisma wins over everyone around him - he seems to honestly love the music. Unfortunately, the film spends too much time with Chucky, Renfro's melancholy performance is dull, not to mention an awkward subplot in which he pursues an older woman played by Calista Flockhart, although her age is indeterminate in the film. One of the least nostalgic takes on the 1950s, here Freed by way of Bacon is desperately flawed. **1/2 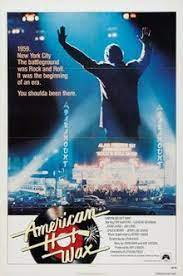 American Hot Wax (1978) Released during the height of '50s nostalgia, the year of Grease, Pauline Kael called American Hot Wax a "Super B-movie." All ramshackle in its performances and structure, Hot Wax took a cue from American Graffiti with its wall-to-wall diegetic music. The late character actor Tim Mclntire is excellent in an idealized interpretation of Freed, passion for the music came first, especially good in a scene when he rhapsodizes on the loss of Buddy Holly. Young people adored his championing the youth and their music, a John the Baptist for the jukebox decade. By far the best watch of the lot, many rock and rollers appear as themselves, while the supporting cast included Jay Leno, Fran Drescher, and Laraine Newman. Despite its punk energy in terms of style and performance, the film flopped at the Box Office. ***

Posted by Eric Gilliland at 1:58 AM