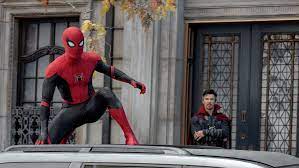 The third of the Tom Holland Spiderman films is a true extravaganza, transcending the dour term "fan service." Picking right up from where the 2019 film Far From Home left off with Peter Parker's secret identity getting revealed, the film continues to develop the characters, specifically the relationship between Peter and Zendaya as "MJ." Benedict Cumberbatch also also returns as Dr. Strange, interestingly taking on more of an antagonist role - of a sorts. The story involves the "multi-verse" and Spiderman getting ensnared in various timelines - all stemming from a ploy to help his friends get into college. For anyone else going in blind, there are many surprises and crowd pleasing moments. No Way Home gets to the heart of why the Spiderman character is perhaps the beloved of all the Marvel heroes and offers the best of highly popular and much maligned brand of movies that for better or worse have ruled the 21st Century.
Posted by Eric Gilliland at 5:50 PM