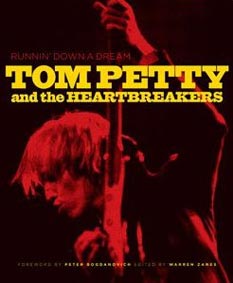 As far as rock documentaries go, Tom Petty and the Heartbreakers: Runnin' Down A Dream gets the job done.  Directed by New Hollywood prodigy Peter Bogdanovich, the documentary covers the entire history of the band up till 2006.  As the decades have passed, Tom Petty and the Heartbreakers became standard bearers of the rock and roll spirit. With interviews and archival footage, Bogdanovich presents a full portrait of the prolific band.

A telling fact is revealed about Petty early in the film.  Despite growing up in Gainesville, Florida he never picked a up a southern accent. Tom's independence, determination to do things his own way, comes out in that anecdote.  While he's written about his Southern roots, no one would ever accuse the band of being Southern Rock.  They embrace a more complex idea of American identity.


A rock and roll fanatic, Petty recruited what became the Heartbreakers when he was a teenager. After years of honing their repertoire, they scored a record contract.  In 1976, "American GIrl" became a hit single with its Byrds inspired melodies.  During a period sandwiched by punk and disco, the Heartbreakers carried the torch of rock music inspired by earlier eras.  Interestingly, they gained a following in England with fans and critics before finding success in the states.  Their third LP from 1979, Damn the Torpedoes, proved their breakthrough in America: "Here Comes My Girl," "Refugee," and "Even the Losers," all became staples of FM radio.

Through the 80s their music and popularity flourished even more with the rise of MTV.  By the end of the decade Petty had a thriving solo career, even playing alongside other rock legends as the youngest member of The Traveling Wilbury's. By decades end the hits kept coming: "Running Down a Dream," "Free Fallin," and "I Won't Back Down."

Petty soldiered on through the 1990s, always carrying the banner of American rock and roll as audiences fragmented.  Their 2002 LP The Last DJ is one of the best albums to deal with post-9/11 America, with Petty's prophetic condemnation of the corporate takeover of radio in the title track.

Interviews with other band members including keyboardist Benmont Tench, guitarist Mike Campbell, and former drummer Stan Lynch illuminate the band's sometime tumultuous history: tensions over Petty's decision to go solo or creative differences in the studio often got intense, but never broke up the band. The tragic loss of bassist Howie Epstein to a drug overdose in 2003 also gets discussed. The interviews are complemented with excellent archival footage.

Fervent fans of the band will love the documentary. Those new to Petty may find it a bit self-indulgent at times. Regardless, Runnin' Down a Dream is a worthwhile history of an essential band.
Posted by Eric Gilliland at 6:39 PM