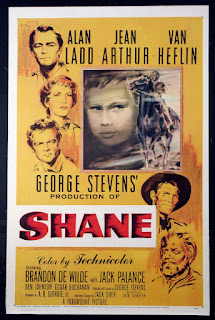 From 1953, Shane is one of the greatest Westerns ever made. The film tells a fantastic story with many powerful themes in the subtext: the tight bond of a family and a meditation on courage and loneliness. Filmed on location in the awe inspiring Grand Teton National Park in Wyoming, Shane is certainly one of the most beautiful films ever made with stunning cinematography by Lowell Griggs.

Based on the Jack Schaefer novel, the story is set in Wyoming several years after the Civil War.  Loosely based on the Johnson County War between settlers and cattle barons, material also covered in Michael Cimino's 1978 film Heaven's Gate, Shane tells the story from the point of view of a young boy.

As the opening credits roll, a stranger named Shane (Alan Ladd) passes through the homestead of Joe and Marlen Starrett (Van Heflin and Jean Arthur) as their nine year old son Joey (Brandon De Wilde) watches. At first the family's uncertain about the stranger seeking a brief stay at their place, but in time Shane and Joe form a bond. Upon first impression Shane seems small and unsure of himself, but looks can be deceiving.  In time they learn he is one of the best gunslingers around and is pretty good in a fight.

Under incessant harassment from a ruthless cattle baron who uses intimidation to drive homesteaders out, they try to lure Shane into a fight.  At first he turns the other cheek, but the next time he strikes back. Stevens filmed an epic fight scene with Shane taking on several goons.  The bond between Shane and the family grows. He teaches Joey how to shoot a gun, although Marlen voices her disapproval of violence, he becomes a trusted defender of the community.

Enter the main villain Jack Wilson, memorably played by Jack Palance.  In a memorable scene he kills a settler in cold blood.  Realizing a final confrontation is inevitable, Shane decides he must end the threat for good.  He insists on confronting Jack alone, Joe and him get into a fist fight as Joey watches his two male role models fight it out.  Shane wins, deciding to save the family by sacrificing himself.

Joey follows Shane into town and watches the final confrontation, leading to one of the great farewell scenes in movie history. By film's end, there are as many questions as answers.  Where did Shane come from?  Was he some archangel sent by God to defend good from evil?  Is he on a quest for redemption for past sins he committed? Was he even real?  The simplicity of Ladd's performance is more powerful than anything in a modern superhero film.

Like many great Westerns, Shane asks the question: What makes a civilization?  Close bonds between families and communities are emphasized.  Civilization also means people sacrificing themselves for a higher cause. A great movie, one that deserves to be seen on the big screen.