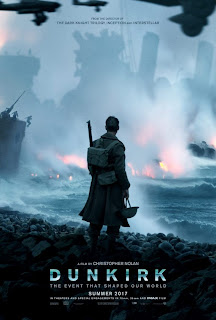 One of the most anticipated films of 2017, Christopher Nolan's Dunkirk is a quasi reimagining of the war film.  The few reviews I skimmed are overwhelmingly positive, praising Nolan's ingenious approach to the genre.  What is the approach?  Basically, separate vignettes told in fragments that blend into a panoramic picture of the Battle of Dunkirk. For myself the film's shortcomings are simple, I found the vignettes unengaging, minimalistic to the point of incoherence.

The German invasion of France in May 1940 changed the course of world history, the swift surrender of the French army left the British Expeditionary Force (BEF) stranded on the French coast. To save the army, the British navy and English civilians organized a dramatic evacuation immortalized in the wartime speeches of Winston Churchill.  The BEF was saved and Britain went on to resist the Third Reich on its own until the American entry into the war almost two years later.

The film opens with British soldiers in retreat from the German forces, interestingly the Germans never appear in the film.  The enemy remains an abstraction.  Other story lines follow Mark Rylance as a British civilian determined to do his part in the evacuation with his sons in tow. Kenneth Branagh plays a naval commander, he's really good at gazing wistfully into the sea.  Nolan regulars Tom Hardy and Cillian Murphy appear in small roles.  The story unfolds in an elliptical way with flashbacks and flash forwards, but the approach adds little to the overall narrative.

While there's enough sound and fury to fill 100 minutes, few of the images are memorable. There's a claustrophobic sense of space, with boats constantly being straffed by German planes, yet it all looks like crisp archival footage set to Hans Zimmer's pulsating music.

Dunkirk is not a bad film by any means, it's an impressionistic war movie along the lines of Terrence Malick's The Thin Red Line, multiple impressions of a singular experience. Yet even Malick allowed us to get inside the heads of his characters. Nolan keeps us at a cool distance.  In other great World War II movies such as Das Boot and Saving Private Ryan we get to know the characters and their motivations, there's a deep humanity through those works.  Maybe Nolan grew tired of the Interstellar critics who chided the film's maximum effort to create an emotional resonance.  Dunkirk keeps sentiment at arms length, resulting in long stretches of tedium.

And then there's the politics of the film, or lack of it.  The issue never comes up, the stakes of the battle are never articulated.  There's hardly any discussion of Hitler and the Third Reich, the enemy could be anyone from anytime in history, giving Dunkirk an almost Sci-Fi feel.  While war films are hardly required to get into the ideas at stake in a battle, patriotism without ideals walks a razor's edge.  Dunkirk is a WWII film that seems to exist outside the war itself.  There's enough style for ten movies, it's the lack of substance that leaves you famished.