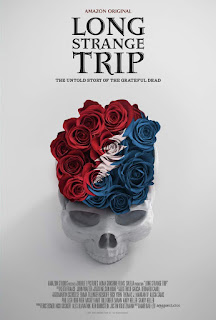 The Grateful Dead are originals. They created music that comes from the fabric of the American experience.  The four hour documentary Long Strange Trip, currently available on Amazon Prime, chronicles the four decade career of the band from their beginnings in the psychedelic scene of 1960s San Francisco to mainstream success in the 1980s. Fronted by the sphinxlike Jerry Garcia, the band carved a deep niche in the history of rock and roll with their improvisational style that created a unique symbiotic relationship between audience and artist.

With Martin Scorsese on board as executive producer, Long Strange Trip recaptures some of the magic of his 2005 Bob Dylan documentary No Direction Home.  The film includes interviews, superior archival footage, and historical perspective on the forces that drove the band.  The tone subtly shifts as the narrative moves forward from the bright idealism of the 1960s to the harsh atmosphere of, in the words of Garcia, the "fake culture" of the 1980s.

In the mid 1960s, Garcia formed the Dead along with bluesman Ron "Pigpen" McKernan. They became fixtures of the counterculture in San Francisco.  The Dead joined Ken Kesey's Merry Pranksters, serving as the house band for his famous LSD experiments, as chronicled in Tom Wolfe's book The Electric Kool Aid Acid Test.

In time the Dead added their own elixir of blues and jazz to rock and roll.  Founding members included the classically trained bassist Phil Lesh, guitarist Bob Weir, two drummers Bill Kreutzmann and Mickey Hart, and lyricist Robert Hunter. Unlike other bands of the era, the Grateful Dead worked from a different model: building a loyal audience through nonstop touring, promising a unique, transcendent experience with each performance.

During the 1970s, the Dead gained a loyal fan base of "dead heads" that followed them everywhere. Although some critics considered their music boring and repetitive, their popularity grew. The 1987 single "Touch of Grey," 20 years in the making, finally got the Dead on the pop charts and even some MTV play.  But just as they were peaking, Garcia fell deeper into his addictions, the documentary suggests it may have been a deliberate message to his fans: Don't be like me.  Years of touring took their toll. Garcia passed away in 1995 and instantly became a legend.

Well versed fans of the Grateful Dead may find the documentary too superficial for their taste, while for those new to the band it's an excellent primer. Original members of the band and those who worked closely with them add colorful commentary.  The time flies by.  Highly recommended.