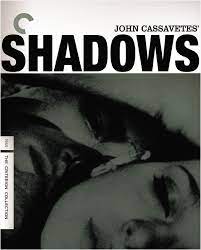 Shadows, the debut film by actor/director John Cassavetes, is considered a landmark in American independent cinema, Cassavetes was on the vanguard New York filmmakers during the 1960s fashioning an alternative to Hollywood movies.

The moody black and white atmosphere of the film follows a collage of characters shifting between aimlessness and ennui in the city. Propelled by Jazz music and the Beat Movement, they shuffle along the fringes of intellectual and artistic life.

A sad love story shapes the narrative of Shadows. Complexities of race and identity are also woven into the film. Lelia (Lelia Goldini) lives with her two brothers Hugh (Hugh Hurd) a jazz singer and Ben (Ben Carruthers) an aspiring writer. Leila is uncertain about what she wants in life and worries about falling behind and aspires to attend college. At a literary party she meets aspiring intellectual Tony (Anthony Ray) who seduces her, but then bails on the relationship for racist reasons.

Cassavetes famously worked out the framework of Shadows through improvisation exercises with the cast. Technical and logistical setbacks extended the shooting of the film, additional scenes were also shot after the premiere was poorly received.

While the improvisational approach feels awkward at first, as the film unfolds the line between fiction and non-fiction blur. By the end, the documentary effect is vivid.

Shadows would cast a wide legacy in the coming decades, especially on New Hollywood filmmakers. Scorsese and Altman immediately come to mind. The realist and film noir style can also find in the French New Wave, especially in Godard's 1960 film Breathless. Cassavetes and Godard set their films in urban environments and relied on character instead of narrative to shape the style.