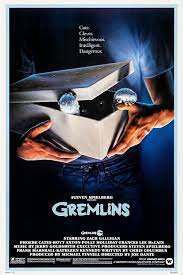 Gremlins imagined the archetypal American small town under siege from hostile creatures who wreak havoc and destruction over the course of a Christmas Eve. Mashing together elements from Frank Capra's Americana with Alfred Hitchcock's sardonic sense of humor best exemplified in The Birds, with a touch of 1950s monster movies like The Blob. Gremlins is also situated within Spielberg's playful and dark portraits of America during the Reagan era.

A box office hit over the summer of 1984, Gremlins was the fourth highest grossing movie of the year in a crowded summer that included Beverly Hills Cop, Ghostbusters, and Spielberg's highly anticipated follow up to Raiders of the Lost Ark, Indiana Jones and the Temple of Doom. Capitalizing on the popularity of horror-comedies during the decade, Gremlins also helped usher in the PG-13 rating by portraying violence considered too intense for a PG audience.

Directed by Joe Dante and written by Chris Columbus, Spielberg admired Dante's work in Piranha and The Howling, two horror movies with a satiric edge. Dante had also directed "It's a Good Life" episode in Twilight Zone: The Movie. Dante brought a sense of comedy, satire, horror, and film history. to Gremlins.

Columbus was a fledgling screenwriter who wrote the first draft of Gremlins, a script that fell into the possession of Spielberg. A native of small town Ohio, Columbus had a sense of Midwest life and an eye for horror. The original script was much darker with the gremlins killing Billy's Mom and going on a cannibalistic rampage at a McDonald's. Those elements were removed to make the film more accessible.

Dante put together a memorable cast of unknowns in the lead roles and excellent character actors for the supporting cast. Zach Galligan as Billy and Phoebe Cates as Kate were cast because of their onscreen chemistry. Hoyt Axton and Francis Lee McCain were cast as Billy's parents. Dick Miller remains a favorite as Mr. Futterman, a xenophobic resident of the town. Keye Luke as Mr. Wing had a long history of acting in Hollywood. Judge Reinhold as the yuppie Gerald rounded out the cast.

The story begins in Chinatown following Randall on the search for Christmas presents. He discovers the Mogwai and buys it despite the warnings of Mr. Wing. Billy works at the local bank and contends with arrogant co-worker Gerald and the snobbish Mrs. Deagle. When presented with the Mogwai Billy is given three rules:

Predictably, the rules are broken, and chaos ensues. When water is accidentally spilled on Gizmo (voiced by Howie Mandel) he self-reproduces lesser tame versions of himself. Later the mogwai fool Billy into feeding them chicken after midnight and they cocoon into gremlins, green creatures who mimic the worst of human behavior: eating junk food, drinking, watching television. They also exact some poetic justice.

Spielberg's pop culture utopia resides in the household space. Billy's room is piled with comic books and his walls are plastered with iconic movie posters. Spielberg kids are rebels of a sort, anti-conformists working from within the system.

The politics of Gremlins is all over the map, not unlike a Capra film. Small town capitalism gets lampooned throughout. Mrs. Deagle owns the town and is closing factories and building golf courses for profit. Billy's mom can be seen watching It's a Wonderful Life makes the parallel even more literal. Mr. Futterman's distaste for anything foreign whether it be cars or movies symbolizes a failing middle class feeling lost in the 1980s, he's stuck in the 1950s.

In recent years Gremlins has also spurred conversations on racial stereotypes, revealing a reactionary streak from the Spielberg machine. Mr. Wing is the mystical Asian stereotype who chastises the Americans unable to handle the mogwai. Some have also suggested the gremlins symbolize white fears about African Americans and urban spaces.
The gremlins reinforce old racist stereotypes, specifically in the bar scene. Glynn Turman plays the only African American character, the kindly science teacher who gets dispatched in an unsavory way. Spielberg's own Indiana Jones and the Temple of Doom was also lambasted for its representation of India. All this points to a complex relationship with '80s pop culture which can serve as a dopamine of nostalgia, at the same time the insensitivity of the era is impossible to ignore.

The Christmas season atmosphere contributes to the sense of maniacal playfulness throughout Gremlins. Dante highlights the traditional imagery of the season - caroling, shopping, lights, making cookies and then subverts them. The dog gets wrapped in lights. While making cookies Lynn is attacked by the Gremlins (brutally killed in the original script), resulting in a gruesome microwave effect that earned the PG-13 rating. The consumer mania of Christmas adds extra fuel to American craziness. To top it off there's also Kate's story about her father dying inside a chimney on Christmas Eve.

Dante had to fight to keep the scene in the film, which elicited laughter and gasps from audiences. The random nature of Kate's revelation in Spielberg's dreamy America hints at the tragedies floating just below the surface. David Lynch would take the concept further in Blue Velvet, but Dante keeps the darkness ever present.

An iconic film during the height of Spielberg's command of pop culture, Gremlins is now sealed in wax as an '80s cultural artifact. The combination of Spielberg's milieu with Dante's subversive sensibility makes Gremlins a fascinating and entertaining gateway into American cinema during the Reagan era
Posted by Eric Gilliland at 6:57 PM