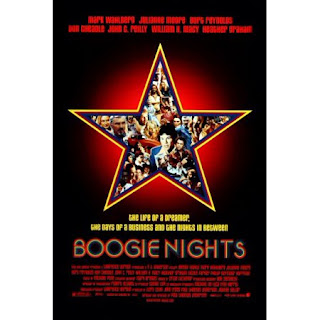 If Hard Eight was a throwback the days of New Hollywood in the tradition of Scarecrow or California Split, Boogie Nights takes a more epic approach. Spanning the late 1970s from the early 1980s, the story follows various figures in the adult film industry gathered around charismatic director Jack Horner (Burt Reynolds). It would be easy to blurb Boogie Nights as the ultimate synthesis of Altman and Scorsese, while that's not completely wrong, Paul Thomas Anderson continued to develop themes he would return to again and again, specifically alternate family structures and an identification with  the outsider.

In a star making role, Mark Wahlberg is Eddie Adams who becomes pornstar Dirk Diggler. The story opens with Eddie working as a busboy at a nightclub where adult film stars frequent, Horner discovers Eddie's physical gift that will make him famous. In one of many memorable sequences, Eddie's introduced to Horner's world at a never ending poolside party. Cocaine and beautiful people are everywhere with "Spill the Wine" playing in the background. The fantastical world of the 1970s adult film industry is countered by Eddie's dull middle class life and a mother who rejects him outright. Wahlberg convincingly portrays an innocent who develops an inflated ego destined to bring about an epic downfall.

Anderson loves his characters and that's part of the enduring power of the film. It's not a jokey picture about the adult film industry or the people who work within it. There's empathy in every frame. Nine years before Boogie Nights, Anderson directed a mockumentary shot on video entititled The Dirk Diggler Story, which takes a satirical approach to the subject matter, I suspect was inspired by trashy news magazine shows of the era. When Scotty J makes a sexual advance on Diggler while drunk the moment plays as awkward and tragic, Anderson lets the camera linger on Scotty as he weeps in the car. The entire cast does a great job of fostering the empathy - Julianne Moore at a custody hearing or Don Cheadle in the middle of a hold up. Even the now famous "Jessie's Girl" scene towards the end with Alfred Molina devolves into tragicomic violence that's both heartbreaking and terrifying in its own unique way.

Boogie Nights also suggests some of the larger themes Anderson would explore in the future, an interest in systems and the mysterious forces that move them. As Horner explains to Diggler, the movies are all about making money. The organized crime funding the films is alluded to but peripheral to the story. The changing technology from film to video allows the films to be made quicker and cheaper. There's also the idea of being outside of society - the thrill and cost of it.

Visually impressive , funny and tragic, while moving at a kinetic pace Boogie Nights has aged well.

Posted by Eric Gilliland at 9:30 PM