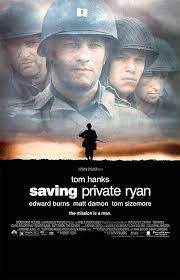 Saving Private Ryan proved to be another cultural touchstone in Steven Spielberg's epic career by launching a conversation on the legacy of the Second World War and "the greatest generation" phenomenon. An overpowering film and groundbreaking in its recreation of the Omaha Beach landings, it looked and felt like no WWII film made up to that point in time.

WWII has enamored Spielberg throughout his career. There was the USS Indianapolis speech in Jaws, the 1979 flop comedy 1941, and the Indiana Jones trilogy. Empire of the Sun from 1987 looked at the war from a child's perspective that was based on the J.G. Ballard novel. Schindler's List portrayed the Holocaust like no film before or since. Arnold Spielberg, Steven's father, had served in the Army Air Force in the China-Burma-India theatre. When asked why the Second World War looms so large in his films Spielberg answered:

I think that WWII is the most significant event of the last 100 years; the fate of the baby boomers and even Generation X was linked to the outcome. (208)

Robert Rodat wrote the screenplay, a fictional story inspired by a real-life anecdote he read in Stephen Ambrose 1995 bestseller D-Day: June 6, 1944: The Climatic Battle of World War II. The story involved a squad of soldiers sent behind enemy lines to locate a lost soldier who unbeknownst to him had lost all his brothers in combat. Rodat's script found its way into Spielberg's orbit, an ideal project for him since he had always wanted to make a film about WWII combat, plus the story of a behind the enemy lines mission to save a family especially appealed to his sensibility.

The cast of the film featured some of the finest young talent in Hollywood. Tom Hanks, easing into his role as America's dad at this point, was a natural as Captain Miller, the "citizen soldier" leader of the squad assigned to find the lost soldier. Matt Damon earned the title role as Private Ryan. Other members of the squad included Tom Sizemore as battle hardened Sgt. Horvath, indie filmmaker Edward Burns as Private Rieben, Barry Pepper as the sniper Jackson, Adam Goldberg as Jewish-American Private Mellish, Giovanni Ribisi as the medic Wade, Jeremy Davies playing the interpreter Upham, and Vin Diesel as the gregarious Private Caparzo.

Recreating the Omaha Beach landing remains the most memorable sequence. The sound design and visual style provide both the scope and horror of the battle. A feat of filmmaking unsurpassed - but not without controversy. Some have pointed out that it downplays the contributions of all the Allied Forces at Normandy and that it glorifies warfare.Francois Truffaut famously stated that it's impossible to make an anti-war movie since any depiction of battle will look exciting no matter how awful. Others have accused Spielberg of glorifying war crimes when American troops are shown shooting German troops after they surrendered.

To the last point, Captain Miller looks on with disapproval when he witnesses the killing of the prisoners. The issue comes up again when they capture the German soldier who killed Wade. After debating whether killing him in retribution they decide to let him go (only to have him return and kill Miller, Mellish, and Horvath at the Remelle battle). Perhaps the point was to show the absurdities and cruel nature of war (not endorsing war crimes).

Once Allied forces secured Omaha and the other landing sites, the grueling drive to liberate France began. The long middle section of Private Ryan is another point of contention, one which I find even more baffling. Spielberg allows to get to know the soldiers and their personalities. Unlike all the soldiers who perished on the beaches, just a pile of nameless typed sympathy letters, we feel the loss when someone gets killed in the squad. It reminds us that the loss of all soldiers on all sides was a shattering loss to their loved ones, a void that never goes away. Spielberg fans always point out that a great strength of Jaws is the screen time devoted to character development, we get to know the men on the Orca. Granted the middle section lacks the pure cinematic force of the opening, but it develops character in a series of effective sequences.

Quiet moments of the men reflecting on their experiences late at night or the tense moments before battle provide a humanity. At the French village an interaction with civilians leads to the death of Private Caparzo, shot by a sniper while trying to comfort a terrified little girl. Spielberg lets the camera linger on him forcing the audience to ponder the loss. The men also debate the logic of their mission, resenting the idea of their lives being sacrificed to save a fellow soldier, the implication being Ryan's life is worth more than their own. Once the squad locates Ryan they remind him of their losses they suffered in order to save him, but they eventually come to respect him as a soldier.

The climactic battle at Remelle is more in the classically cinematic mode with Spielberg pulling out all the stops with long shots, close ups, tracking shots, a far more personalized than the Normandy sequence. A sense of desperation and intensity are the primary tone, but it's also a textbook action sequence heightened by the personal drama.

The bookend sequences, with an older Ryan revisiting Normandy with his family, also elicits conflicting reactions. When Ryan asked his wife if he was a good person, it feels overly sentimental. From a narrative perspective, it does provide a proper ending to the story. Though part of me is more interested in a film where we don't know the fate of Ryan.

Saving Private Ryan continues to influence war movies with its dedication to realism and kinetic style. Tom Hanks's quiet but determined performance as Miller offered an everyday type of heroism free of the over the top bombast of the John Wayne movies. While there are still so many stories to be told about the war and its ongoing meaning in American and World history, Saving Private Ryan opened new possibilities.