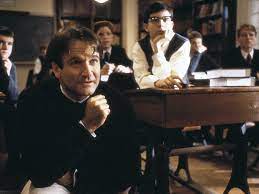 The inspirational teacher remains a popular movie trope. Goodbye Mr. Chips celebrated the dutiful teacher dedicated to his students, and many classic films followed in that spirit. Dead Poets Society is remembered as one of Robin Williams's memorable roles, one that earned him an Oscar nomination and was fondly memorialized after his passing. Set at a New England Prep School during the 1950s, Williams plays an anti-conformist poetry teacher who inspires his students in the right ways and wrong ways.

Peter Weir's direction complements the Williams performance. At the vanguard of the Australian Wave 1970s cinema, Weir directed multiples classics including The Cars That Ate Paris, Picnic at Hanging Rock, The Last Wave, and Gallipoli all notable for their distinct sense of setting and history. Weir made two films with Harrison Ford in the mid-1980s; the popular Witness set in Pennsylvania Amish country and The Mosquito Coast a prescient and moody fable of American hubris and the colonizer mentality.

The insular Prep School (Welton Academy) environment suits Weir's sensibility and mirrors Hanging Rock which was set at a Girls School during the early 20th Century. Dead Poets Society lacks the sense of mystery of Hanging Rock and instead tells a more focused story (the boys retreating to the cave to read poetry may be an indirect reference) one might find on an After School special.

Robin Williams stars as John Keating, the new English teacher at the academy. The students all come from white families of privilege and are destined for Ivy League colleges and lucrative careers. Notables among the cast of students are Ethan Hawke in an early role as a shy student and Robert Sean Leonard (Neil) as a sensitive young man inspired to pursue acting by Mr. Keating.

Williams certainly commands every scene he's in, but the story's not really about his character. Next to nothing is revealed about his personal life or about his past (in an early version of the script he was struggling with cancer). While the students are skeptical of his unorthodox teaching methods at first: ripping out pages of the textbook and arguing that poetry should be viewed as a way of life, they come to admire him as a role model. The now often repeated slogan of the movie, "Carpe Diem" (seize the day) inspires the boys to take risks, but at the same time leads to conflicts with their elders. This is where the movie suffers from not revealing more about Keating: Has he lived by his own principles?

Keating's anti-academic approach to teaching poetry is illustrated in the scene where he defies the need to study poetry strictly by looking at form (meter and verse). Keating mirrors the Beats of the 1950s, although neither Ginsburg nor Howl are referenced. Keating's teaching methods put him at odds with administration who want to deter students from pursuing the arts instead of a professional career. It's an indictment of a system designed to stifle creativity that remains the ethos in the even more careerist educational system of the 21st Century.

As the administration notices a change in Keating's students, the Dean (Norman Lloyd) begins to get suspicious. When Neil's passion for acting bring him into conflict with his conservative father it leads to tragedy. The false optimism of the final scene speaks to an emptiness running throughout the film. At one point Williams appears to go into his stand-up routine doing a Brando impression, a moment that now lands as forced. Neither is there much personality among the students who continually view Keating as more of an entertainer than a teacher.

While Dead Poets Society is obviously speaking to 1950s conformity, a less melodramatic approach to the material would have allowed for nuance on the theme of teaching methods and purpose of an education.

Posted by Eric Gilliland at 4:10 PM