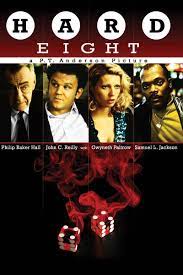 Hard Eight opens with the image of a forlorn looking young man sitting outside a diner entrance with his head hung down. Thus, begins the first feature length film from Paul Thomas Anderson.

Originally titled Sydney and loosely based on Anderson's short film Cigarettes and Coffee (both starred Philip Baker Hall), Hard Eight is not so much a story about redemption, but one about loyalty and survival.

An imposing, but genial, figure Sydney invites John to join him for breakfast and offers to help him out. Sydney teaches John how to manipulate slot machines and the two forge a bond. Sydney knows how the world works - and his own limitations. He takes a risk management approach to everything. Everything from business relationships to crap games to fashion choices are governed by principles, it all comes down to minimizing the losses.

When the story jumps ahead two years Sydney and John are in a de facto partnership. Anderson tends to cast Reilly as a well meaning simpletons, his naivete both a strength and weakness. Hall played Richard Nixon in Secret Honor, one of Anderson's favorite films. In Hard Eight he's playing a more benevolent version of Nixon, a figure with a tempered strength barely veiling a haunted darkness.

Their partnership is complicated with the entrance of Jimmy and Clementine. Jimmy works in security and is a small time hustler on the side. Clementine is a waitress/call girl John falls for. Jackson and Paltrow were up and coming stars at the time. Jackson delivers a nuanced performance with his suave intensity, while Paltrow brings a humanity to a tropey type of role.

Now eight films into his career (with one in post-production), Anderson loves to subvert the family structure, focused on the intricacies of these relationships and how they evolve over the passage of time. After John and Clementine get married they get themselves into a dicey situation of their own doing. When called in to help, Sydney is faced with agonizing decisions. The scene in the hotel room is impressively acted and rippling with tragedy, the real climax of the movie (the denouement plays out with a fatalistic melancholy.)

A keen character study of characters on the fringes sometimes at odds and sometimes helping each other out, Hard Eight is a throwback to New Hollywood cinema with its beautiful losers and regal tones.