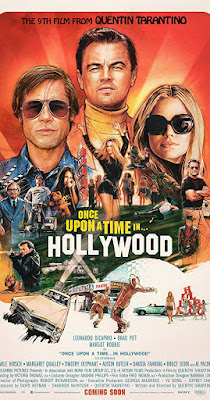 Quentin Tarantino's Once Upon A Time in Hollywood creates a sense of time and place you are loathe to depart as the end credits roll. The film marks a departure for Tarantino whose recent films like Inglorious Basterds, Django Unchained, and The Hateful Eight are arresting chamber pieces memorable for their descent into cartoon violence (we get some of that here, but dramatically dialed down). Like Jackie Brown, Once Upon A Time is leisurely paced - allowing the audience to soak in the sun drenched period ambiance.

Leonardo DiCaprio plays TV star Rick Dalton and Brad Pitt is his stunt man Cliff Booth. Dicaprio and Pitt each received top billing, a call back to Steve McQueen and Paul Newman in the 1974 film The Towering Inferno.

Rick starred in a popular TV Western in the early 1960s and attempted to make the leap to the big screen with mixed results. Now he's reduced to doing guest spots on episodic television as the heavy. He's conflicted about offers to make Spaghetti Westerns in Italy, a genre he considers a further step down the career ladder.

Cliff is a reliable and loyal friend to Rick, but is haunted by a checkered past. He's confrontational and displays some violent tendencies that go on display during an encounter with Bruce Lee. Cliff lacks direction and gets himself into odd situations such as stumbling upon the Spahn Ranch outside of Los Angeles where he discovers a gathering place for strung out hippies. Pitt and Dicaprio have a great chemistry, channeling the Newman/Redford buddy comedy dynamic.

Margot Robbie portrays real life actress Sharon Tate. A rising star married to Polish director Roman Polanski, Tarantino's camera follows Sharon around as she goes about her daily life. She goes to the movies, Hollywood parties, listens to rock records, and gladly signs autographs for her fans. The "fly on the wall" approach does conjure a sense of dread, but also a moving portrait of a young women enjoying life in Hollywood.

Tarantino sets specific tones for each story line that nicely blend into each other. DiCaprio's sections are all about acting and aging, the pressures of nailing a scene. Robbie's scenes are reminiscent of a light hearted cinema verite film. Pitt's are more action driven and suspenseful, not unlike the classic TV shows referenced throughout the film like Mannix and The F.B.I. Without getting into spoilers - the story lines converge in the final act.

In the midst of all this is the changing culture of 1969. Although Easy Rider is never referenced (not to my recollection anyway), the New Hollywood directors were on the cusp of bringing their visions to American cinema. Studios were desperately trying to connect with a youth audience. Cliff and Rick symbolize old Hollywood and worry the times are passing them by. They despise hippies, but also find aspects of the counterculture attractive. Their shared angst about the future plays well with overarching theme of the film: the combined sense of excitement and loss during a time of transformation.

Tarantino's most mature and self-assured film to date, Once Upon A Time in Hollywood reminds us movies can still be transportive, evocative, and exciting.

Posted by Eric Gilliland at 9:02 PM